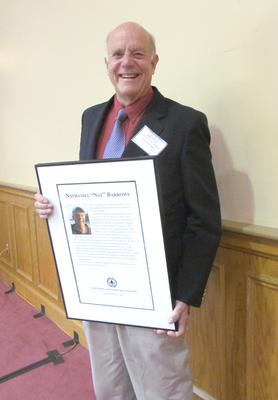 Before an audience of colleagues, employees, family and friends, many who overlap categories, Penobscot Bay Press owner, Editor and Publisher Nat Barrows was honored at a Maine Press Association luncheon October 20 as a 2018 Hall of Fame inductee. He joins 70 newspaper people inducted since 1998 who have made outstanding contributions to the profession, the criteria for nomination.

Barrows was nominated by longtime Copy Editor, Columnist, Editorial Page Editor and Book Editor Caroline Spear and Managing Editor Faith DeAmbrose. “Nat’s passion, persistence and dedication over these many decades are what commend him for this nomination,” Spear wrote in her introduction to Barrows.

Barrows’ first edition as owner and publisher of the Island Ad-Vantages rolled off the press in August 1968. In 1981, he bought The Weekly Packet in Blue Hill and, in 1990, the Castine Patriot. He has worn many hats as owner of Penobscot Bay Press, the parent company of the three newspapers, information products and local history books. Primary among them was as a journalist.

In 2007, Barrows was named Journalist of the Year by the Maine Press Association.

“News is more than a noun,” Barrows said upon accepting the award at Sunday River Resort in Newry. “Community journalism is about making a commitment to the people you live with.”

He also outlined the three elements needed for a “successful, weekly community newspaper: a committed, dedicated, professional, caring and passionate staff; businesses and organizations that are willing to advertise …[and] readers who will subscribe and buy the newspaper on the newsstands.”

In writing her introduction, Spear noted: “Never wavering, Nat is a man of great character and moral conviction and believes in holding all people to those same standards. For the last five decades he has not only brought those qualities to his reporting, but has insisted that they guide all decision making at Penobscot Bay Press.”

Barrows’ moral conviction asks that his colleagues and employees “burrow down. The trust starts inside each one of us.” The cardinal virtues of a journalist include courage, persistence, humility, inclusiveness, truthfulness, thoroughness, accountability, sensitivity/compassion and righteous indignation. The temptations include “the illusion that we are part of the power structure,” vindictiveness, letting personal biases into coverage, the need for approval, and sanctimony.

“The creation of an ideal future depends on our ability to envision it. The words we use describe our reality; as we change them, we change our reality,” says Barrows.

Two other newspaper people were inducted into the Hall of Fame: Winifred French, the late founder of The Quoddy Times, and Kathryn Olmstead, a Bangor Daily News correspondent, Aroostook Republican & News editor and a member of the journalism faculty at the University of Maine for 25 years.

Maine Press Association President Faith DeAmbrose and managing editor of Penobscot Bay Press newspapers, presided over the event, and much of the 2018 annual MPA conference. A four-year board member of the MPA, she stepped down as president at the conclusion of the conference but continues on the board for her fifth straight year.