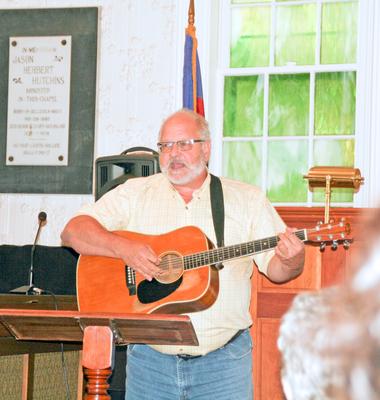 Paul Anderson, Executive Director of the Maine Center for Coastal Fisheries and an amateur musician, sings The times they are a-changin’ by Bob Dylan, during his presentation about the impacts of climate change on Eastern Maine fisheries.

Managing Maine’s fisheries during a period of rapid change was the focus of a talk given by Paul Anderson, executive director of the Maine Center for Coastal Fisheries, at the Sunset Congregational Church on September 17. The presentation, titled “Managing our Fisheries in this Changing World,” was the last of five talks given this summer as part of an annual Island Speakers Series. “The purpose of the series is education, awareness, and outreach,” said Anne Douglass, Program and Outreach Director for the church.

Anderson outlined the multiple stressors and drivers that are impacting fisheries management today, including climate change. “As the world is changing around us, there are cycles on this planet that are no longer as predictable as they once were, and that is throwing us into some level of disarray,” he said. The fisheries depend on food webs where they eat the right thing at the right time, but those inter-relationships are being disrupted by climate change, he explained.

In addition to warming oceans, increased storms and rising sea levels, the fisheries are being impacted by ocean acidification, which is a change in the chemistry of the sea caused by increasing CO2 levels. Other drivers of change include market forces, demographic and societal changes, said Anderson. This has made the work of MCCF, whose mission is to secure a sustainable future for fisheries and fishing communities, increasingly complex. Anderson said he has been working with staff and board members to refine how the organization will achieve its mission in the face of rapid change.

One of the problems they are tackling head on is how to diversify the fisheries. Over the last 50 years Maine fisheries, which once included a diverse number of groundfish species, has changed to one that is dominated by lobster. “We want to pay attention to that and ask what does it mean for the fisheries and fishing communities, what happens if it stops, and what opportunities might emerge as other species show up?” he said.

Anderson said that MCCF is working to achieve both prosperity and conservation for the industry, and that stewardship and collaboration drive their work. “We believe in collaborative research and working with fishermen and communities to gather data,” said Anderson. Finding effective ways to build trust between fishermen, regulators and scientists is an important part of what they do, he said.

Anderson touched on some of the programs that MCCF offers, including working with communities on the restoration of alewife in the Bagaduce River, listening to fishermen about how to better manage and understand the scallop and groundfish fisheries, and working with the next generation of fishermen through a high school program known as the Eastern Maine Skippers Program.

One of the largest projects being undertaken by the organization is a formal collaboration at the national, state and local levels for ecosystem based management of the fisheries. Known as the Eastern Maine Coastal Current Collaborative or EM3C, the partnership includes NOAA Fisheries, the Maine Department of Marine Resources, and Maine Center for Coastal Fisheries.

“Ecosystem based management is something we have a great opportunity to explore in a way it’s never been done before in the U.S.,” said Anderson. The project will be looking at how environmental, economic, and social influences interrelate in an area that goes 40 miles inland and 40 miles out into the Gulf of Maine. The area is a “bio-physical place” where there are bookends between Penobscot Bay and Canada, said Anderson.

Understanding how all these systems relate to each other, during a time of rapid change will be exceedingly complex. EM3C will be taking it on in small bites, starting with a workshop in November where members will discuss what they already know, so that they can begin asking questions about what they don’t know. The project has a five year timeline to develop a framework and will identify policy that can be more responsive to change. The project has the attention of people around the world, and the hope is that the process can be replicated elsewhere, said Anderson.