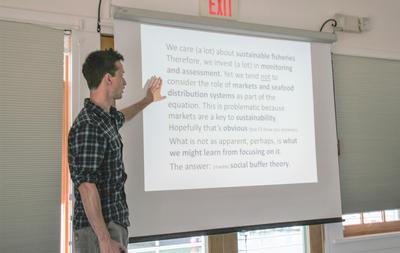 “Why a lobster roll could cost you $40” was the provocative title of the latest talk given as part of the regular “Lunch and Learn” series, hosted by the Maine Center for Coastal Fisheries in Stonington. Held from May through October, the series has given residents and visitors the chance to learn more about the complex issues facing local fisheries and fishing communities.

The latest talk, held on August 31, was given by Joshua Stoll, a Cooperating Scientist with MCCF and an Assistant Research Professor at the University of Maine. Stoll has been studying global seafood markets and the role that seafood distribution systems play in sustaining fisheries.

The lobster industry is a critical part of the Maine economy, and lobster is the single most valuable species in all US fisheries — yet very little is known about the impact of global trade on this important resource, said Stoll. While a great deal of investment has been made in monitoring and assessing the environmental health of the fishery, “we don’t do much to monitor the entire process from boat to lobster roll,” he said. This is problematic, because at the end of the day, global markets play a pivotal role in the success of the industry, he explained.

As an example of this, Stoll described the 2012 conflict over the shipment of US lobster to Canada for processing. Shipments from Maine were turned back at the border due to a glut in the market, dropping lobster prices dramatically. He also described the effort to expand the market for spiny dogfish to Europe, after ground fish populations declined in New England. When several shipments exceeded European standards for allowable levels of toxins, the market never fully recovered, despite the fact that subsequent shipments did meet those standards.

The current trade war with China has resulted in a 25 percent tariff on US lobster, and while it is too soon to tell what the impact will be, it provides yet another example of how susceptible the industry can be to global market forces. We may not even understand how big the Chinese market actually is because little has been done to track how much US lobster is re-exported to China from middlemen in non-producing countries, explained Stoll.

One unintended consequence of global trade that concerns Stoll is the potential impact on what he calls the “social buffer.” When the lobster industry has been negatively impacted by market forces, it has been buffered by a social response that often arises to address the crises. “Communities have played a role in the sustainability system by acting as a backstop to sudden market conditions,” said Stoll. After prices dropped in 2012, cooperative marketing efforts arose to promote Maine lobster, helping it expand to the European market. A cable TV show about lobstermen appeared, drawing attention to the iconic industry, and efforts were made to get Maine lobster certified as a sustainable fishery for marketing purposes.

But when seafood is distributed globally, it can disconnect local communities from its fishery. In Australia, where Stoll traveled to visit the Sydney Fish Auction, local lobster was trading at dock prices far greater than what Maine lobstermen receive for their catch in the US. This is because 90 percent of Australian rock lobster is exported to China, where demand is strong. While the prices are beneficial to the lobstermen, it has meant that most Australians no longer eat lobster because they cannot afford it, and have since lost their social connection to the resource. “If that happens here, then the cost of a lobster roll could be $40,” said Stoll. “Lobster is a part of the fabric of our community, it’s why people come to Maine,” he added. Without community connection and support for a fishery, fishermen may not get the economic and political support for their industry when they really need it, explained Stoll. In conversations with fishermen in the lucrative Australian abalone fishery, Stoll was told that fishermen would take a lower price for their catch, “if they knew the community had their back.”

While Stoll emphasized the importance of global trade, he argued that more research is needed to understand its far reaching impacts, so that fishermen and communities can work to offset any potential negative consequences.