Stonington
Originally published in Island Ad-Vantages, December 20, 2019
Alfred’s Christmas Fund: 10 years of love and community
‘This is about putting smiles on kids’ faces’ 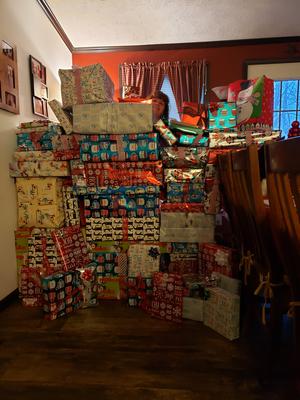 Theresa Gove-Eaton, above, is ready for Alfred’s Christmas in 2019, with over 400 gifts ready for delivery—not including those collected by Bobbi Billings.

Thirteen years ago, Christmas turned from happy to heartbreaking for Theresa Gove Eaton. Her 21-year-old son Alfred Clough died unexpectedly on December 17, from an allergic reaction to a painkiller, turning a season of joy and family into one marked by tragedy.

“The second year, I started Christmas shopping [and] I picked things up and put them back. I was used to shopping for my three boys. I started hating Christmas,” Theresa recalled.

Three years later, the holiday season came around once again, with its sad memories for Theresa, but she had had enough.

“In 2009, I said I had to do something to bring Christmas back into my heart. It was hard for me to watch all the other families, with all their children.”

Christmas had been Alfred’s favorite holiday, and every year, since about age 8, he would pick three names of children and buy them presents. “It always had to be boys because we didn’t shop for girls back then,” Theresa said. “And we had to buy them first…then we’d do our own shopping.”

Alfred’s generous holiday heart is the driving force behind Alfred’s Christmas Fund, which Theresa started that year, with a few like-minded friends and family.

“Alfred’s father is my first cousin Jay Clough,” Bobbi Billings said. “I got involved because I wanted to help Alfred’s family heal and I wanted to do something that I know Alfred would have just loved.”

That first year, the Fund delivered wrapped gifts to 39 families, with names of families in need provided by churches, schools and child care providers. In 2018, 123 families were served.

“This year was a big number because the fishing industry wasn’t so great,” Theresa said, with Corey Eaton, her husband, adding, “It’s the sternman, the minimum wage workers and all the people with seasonal jobs.”

The Fund is open to all islanders, and also to residents of Sedgwick, Brooklin and Brooksville.

Theresa, Cory, Bobbi and other volunteers start buying in January, when items such as tape, wrapping paper, boots and jackets are on sale.

“We take [the children’s] last year’s sizes and up them,” Cory said.

They raise money in a variety of ways, including “little fundraisers,” such as raffles and dinners, and by contacting local businesses for donations, which “all help out a lot,” Theresa said.

The Fund also receives three quarters of the proceeds raised by the Festival of Trees each December at the Island Community Center, which runs to several thousand dollars.

“For me, the issue is always getting enough funds to make a Christmas happen for everyone who needs it,” said Bobbi, who writes an annual appeal letter each October. “Fortunately, we live in a very giving, compassionate, caring and loving community. I couldn’t organize anything if I didn’t have folks opening their hearts and wallets.”

Bobbi, Theresa and Cory all have Christmas requests and deliveries that have stayed with them. “A little boy wanted canned Spam,” Theresa recalled. “[His mother] said he really needed a coat and boots but he wanted canned Spam to take to school but it wasn’t in their budget. Instead of asking for gifts, he was asking for food.”

Another little girl asked for a pillow, Bobbi said, because she had never used anything besides a couch cushion before. And she remembers delivering to a house where all the rooms but one were closed off in winter, because of heating costs.

For Bobbi, helping Christmas be a time of joy and good fortune for all families hits close. “I was one of the children that remembers all too well what disappointment was at Christmas,” she said. “I can remember one time when I was about 6 or 7 years old that our family had a VERY, VERY lean Christmas…I remember crying and just thinking I didn’t understand why I didn’t get what I wanted for Christmas, since I had been a REALLY good girl.

“I’ve just been so honored to be able to make certain that other children never have to feel that disappointment.”

“This whole project is really about putting smiles on kids’ faces,” Cory said.

Bobbi added: “It’s not up to me (or anyone else) to make judgments about what the child’s parents choose to do with their money or make assumptions…. I know what [we] do will make a real difference to a child that deserves to feel loved, special and happy for at least one moment in their life.”

Volunteers to Alfred Christmas Fund include members of the Clough family, the Stonington Methodist Church, St. Brendan’s Church and Kathleen Osborn, “who is my right-hand woman,” Bobbi said.

“If it wasn’t for the community help we wouldn’t be able to do it,” said Theresa. “I’m doing it because I feel like [Alfred]’s still doing it. It’s love from above.”