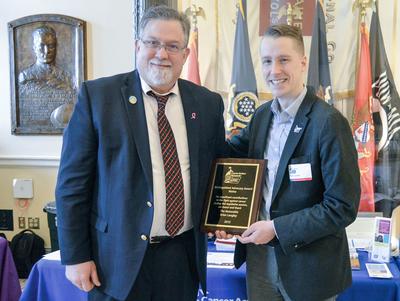 Brian Langley is honored with the American Cancer Society’s Advocacy Award in 2016.

A Republican from Trenton, Brian Langley has just finished his fourth and final consecutive term as state senator for District 7, which includes Blue Hill, Brooklin, Brooksville, Deer Isle, Sedgwick, Stonington and Surry. His two years in the House beforehand mean that Langley has spent much of the last 10 years serving in Augusta.

His desire for legislative office arose because “year after year, it became more clear that the government had ceased to listen to the people of Maine,” Langley said in a 2010 interview with Penobscot Bay Press.

Now, Langley said, “the voices on the fringes have gotten louder and, I think, have dominated a lot of the conversation. I think of centrist, center right, center left, their voices have been kind of squelched.”

A legislator who has supported consumer protection for seniors, direct shellfish sales from harvesters to retailers, streamlining government regulations to help job creation, the creation of public charter schools, and a range of education reforms, Langley said the success of Maine depends on staying politically close to the center, which has not happened.

Langley said that Maine used to be immune to the national political scene, and that “people put Maine before their parties and politics. I would say in the last session I didn’t feel that way. I felt that the rancor that was at the national level, because you’re seeing it every day in the news, was making its way down to state politics. That was very disconcerting. I certainly believe that the tone is really set at the top by leadership and I felt that in Washington, prior to this administration and with our current administration.”

“As I left the legislature, we were not in a better place than when I started in 2010, or at least in the Senate,” he said. “It got very frustrating. It felt like every last thing was a negotiation, even as far as saying the sky is blue. Someone would say, the sky is green; what will you give me to say it’s blue? I struggled against that.”

Langley said both the Democrat and Republican caucuses share the blame for this. “On both sides, things were done, roadblocks, barriers, penalties were paid if you were seen to fraternize with the enemy too much. That was discouraging to me.”

The economic landscape looked different when he joined the senate than it does today, and his constituents’ concerns reflected that, he said. “When the Republicans got into power in 2010, there was a billion dollar [state] shortfall, hospitals [were] owed a lot of money, and a high unemployment economy. As time goes on and those things get resolved and things are more on track, then things like health care pop up, infrastructure, roads and bridges.”

As a freshman senator, Langley received valuable advice from experienced legislators, such as Tom Perkins, from Blue Hill, and Dennis Damon. He was told to vote his conscience, to vote in a way that you can sleep at night. “I took that stuff to heart. There were times I was a skunk at the party.”

Langley conveyed this when he served on a panel for new and incoming legislators. “I said, you’re not going to always get it or guess it right.”

His 10 years in the legislature helped him learn how to listen and listen well, he said, and to wait to hear all sides of a story before forming opinions.

“What it really did for me was help me kind of find my voice in things, and give me great faith in the power in our community. When people get together locally, whether it be a school board or [board of] selectmen, people really need to not be afraid to speak up. I find that now I’m not so [likely] to sit there and be quiet as I would have in the past if it’s something I feel strongly about.