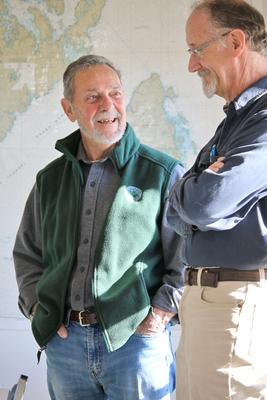 Ted Ames, at left, speaks with Fisheries Education Specialist Tom Dyum at a January 28 luncheon at Maine Center for Coastal Fisheries honoring Ames for his contributions to fishing, fisheries, and ocean ecology.

The island is home to many fishermen, but have any been awarded a MacArthur “genius” grant? Or had a resolution in their honor introduced into the Congressional Record? Doubtful. Apart from Penobscot East Resource Center co-founder Ted Ames, that is.

Ames was honored for 60 years of contributions to fishing, fisheries management, fishing science and ocean ecology at Maine Center for Coastal Fisheries on January 28.

“You have demonstrated a deep commitment to our ocean resources and fisheries,” Senator Susan Collins wrote in a letter read by her Maine representative, Carol Woodcock.

Senator Angus King introduced a resolution into the Congressional Record honoring Ames. “Between the two of them [Ames and his wife Robin Alden], they taught everything King knows about fisheries,” Chris Rector, regional representative for King, said before presenting a copy of the resolution to Ames.

A fisherman with a master’s degree in biochemistry, Ames founded the former Zone C Lobster Hatchery in Stonington, is the former executive director of the Maine Gillnetters Association, developed and served as director of the Alden-Ames Laboratory in Stonington and chaired the Stonington Harbor Committee for a decade. He was a science teacher at University of Maine and Mount Desert Island High School for 10 years, a Visiting Coastal Studies Scholar at Bowdoin College in 2010, and the 2007 Geddes W. Simpson Distinguished Lecturer at the University of Maine.

Ames was awarded a MacArthur grant in 2005 after mapping cod spawning areas in the Gulf of Maine and analyzing historical fishing grounds to help identify the stock structure of cod. He also served on several state fishery boards and initiatives, and on the Deer Isle-Stonington School Board for four years.

All the while, Ames was a fisherman, captaining the lobster boat F/V Mary Elizabeth from 2001 to 2018 and the F/V Dorothy M., for dragging, gillnetting, scalloping and shrimping, from 1978 to 1990.

The occasion naturally lent itself to a few fishing stories. “We’ve had some great adventures,” Ames said, promptly launching into a story about falling asleep at the wheel early one morning in Frenchman’s Bay and waking up in Canadian waters “with a [boat] captain shaking his fist at me” and his net “torn from one wing to the other.”

MCCF Executive Director Paul Anderson led a champagne toast for Ames’ “career and many successes. But Ames appeared to take the accolades in stride. 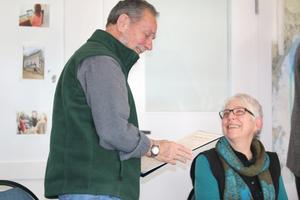 Ted Ames holds a copy of the resolution made by Senator Angus King for the Congressional Record at a January 28 luncheon in his honor at Maine Center for Coastal Fisheries, which he founded with wife Robin Alden, looking on, in 2003. 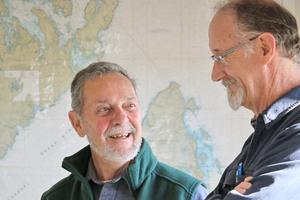 Ted Ames, at left, speaks with Fisheries Education Specialist Tom Dyum at a January 28 luncheon at Maine Center for Coastal Fisheries honoring Ames for his contributions to fishing, fisheries, and ocean ecology. 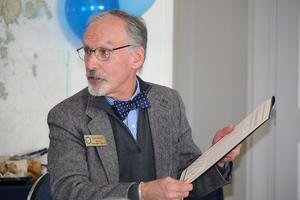 Senator Angus King’s regional representative Chris Rector, above, presents a resolution introduced into the Congressional Record recognizing Ted Ames for his accomplishments, at a January 28 luncheon at the Maine Center for Coastal Fisheries.