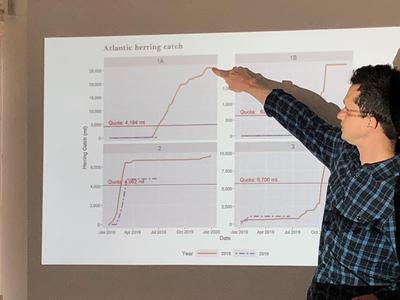 Researcher Joshua Stoll, of the University of Maine and Maine Center for Coastal Fisheries, discusses data behind the herring shortage affecting the lobsterfishing industry, at MCCF on June 28.

The care and feeding of lobsters in the face of a bait crisis was the focus of a presentation at Maine Center for Coastal Fisheries on June 28. Joshua Stoll, a University of Maine assistant research professor who holds a joint research position at MCCF, led a Lunch & Learn on the issue attended by about 25 people, including two lobstermen.

With a shortage in herring, most lobstermen’s first choice to bait lobster traps, the industry is looking for solutions. “No bait is a big problem for a state that depends so much on lobster,” Stoll said.

With about $60 million in ex-vessel landings value at the Stonington port in 2018, the commercial lobster industry supports thousands of local jobs, he noted. “Lobster is currently the most valuable fishery in the U.S., and 80 percent comes from Stonington.”

A lobster will wander into baited traps, eat and then leave “multiple times over its lifetime,” Stoll said. And while data on how much herring is used by Maine fishermen is scarce, the herring quota in 2010 was 70,000 to 75,000 metric tons, most coming from the Gulf of Maine, specifically Area 1A along the coast. In 2019, the quota was 15,000 metric tons, with the proposed 2020 quota even lower.

“We’re talking about a substantial deficit of what we need to support the lobster fishery,” Stoll said.

Compounding the issue is that while lobstermen are just now starting to fish after a cold spring, already 40 percent of the total herring allocation has been reached.

“Fishing industries have a long history of being entrepreneurial,” Stoll said, with fishermen, scientists, bait suppliers and lobster dealers all working to find solutions.

In 2002, Department of Marine Resources data showed Atlantic herring was the dominant lobster bait in use, but, by 2017, herring accounted for only about half the bait used.

Lobstermen are dealing with the herring shortage in different ways, Stoll said. One way is to do nothing and hope the problem resolves itself or others in the industry find solutions. Other approaches are to fish less and/or later in the season; use less bait; catch their own bait, such as pogies; or, if near the end of their career with a paid-off boat, leave the industry. Meanwhile, bait dealers are looking into “banking” bait in cold storage, and all parties are working to identify alternative bait.

Research into using Asian carp, a species that has heavily invaded the Great Lakes, synthetic bait or terrestrial bait made from pig or cow hide are options, as is accelerating the DMR’s bait approval process. A local invasive species, green crab, has been experimented with, but potential pathogens are an issue. Another option is negotiating the herring quota, with questions over the accuracy of the ecosystem modeling used to determine the quota, set by the Atlantic States Marine Fisheries Commission.

But if, as Stoll posed, you are what you eat, will a change in bait change lobsters? That is, does Maine herring make for a distinctly Maine lobster? Bait comprises 80 percent of a lobster’s diet, Stoll noted, and changing its diet can negatively impact its health, and perhaps its taste.

However, Stonington lobsterman John Williams said that while “most people have the perception that fisheries use nearby bait sources, that’s not true.”

Transportation costs come into play, though. “There’s a lot of fish that doesn’t cost a lot but it’s getting it here,” Williams said, adding that with the rising costs of lobster fishing, landing $1,000 worth of lobsters used to be a good day but now “only breaks even” for a lobsterman.

“How much bait can you use? Only what you can pay for,” Williams said. “We’re using less bait and getting the same lobsters. I haven’t bought herring in five months.”