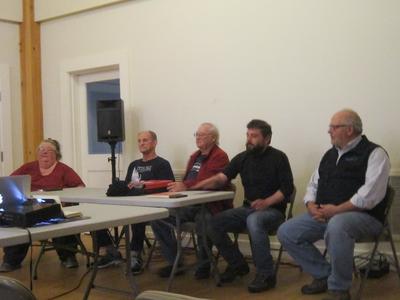 Long-term cooperation between the state and the Island towns has been an effective way to manage the clam fishery on the island, according to a panel of diggers, a town official and researchers.

But there are issues—some longstanding, others newly created—that threaten the industry that provides good jobs for local residents and an economic benefit to the local towns. The Maine Center for Coastal Fisheries (MCCF) hopes to build on the existing co-management process to develop a bottom-up effort to further identify and address those issues through intense conversations among diggers, MCCF executive director Paul Anderson and Mike Thalhauser, a fisheries biologist at the center, who organized the panel discussion for the annual Island Heritage Trust Earth Day Walk and Talk program on April 22.

According to Anderson, the co-management program grew out of earlier state efforts to monitor the health of the clam flats and to ensure public health. Eventually, the state recognized that it could not manage the resource on its own and the Legislature passed a law to allow for co-management.

“If a town adopts an ordinance for shellfish management that meets certain criteria the state has, then that town has permission to co-manage those flats,” Anderson said.

With the ordinance, which includes creation of a local clam committee as well as an enforcement component, the towns gain the right to control access to the flats through licensing, he said.

The benefit of the co-management process has been that it places much of the planning and decision-making about the local shellfish resource in the hands of the people who know it best, according to Stonington Town Manager Kathleen Billings.

“This is a local-control fishery,” Billings said. “This is something where these towns and harvesters can work on the different parameters that they want to see; whatever that is, whether it’s when you dig, where you dig, whether you dig at night. There is a whole program with this co-management with DMR that they can look at and see how it best suits us.”

Clamming is a $12 million industry statewide and is an important part of the island economy. For the two towns, clams mean jobs that provide a huge economic spinoff, she said.

The two towns adopted clam ordinances in 1999 and for the past 20 years they have worked through a joint Shellfish Conservation Committee to oversee the local clam flats. The state still oversees the overall health of the clam habitats and controls open and closures of the flats due to various kinds of pollution. The local committee, however, has worked to identify the sources of pollution. Committee member George Powell outlined their latest grant project that will focus mainly on Long Cove in Deer Isle, an area that is closed periodically.

“These areas are pretty good right now, but (the water quality) gets worse, and we want to know why,” he said.

The project calls for collecting water samples around Long Cove throughout the summer, Powell said. Those samples will be stored at the DMR lab in Lamoine and sent out for additional testing at the end of the season. New technology will allow them to perform DNA testing on samples that register e coli, which, according to Thalhauser, can distinguish the difference between human and animal bacteria in the water and in some cases can differentiate bacteria from different species of animals.

“It’s sort of CSI on the clam flats,” Thalhauser said.

If the pollution does not come from humans, then they can look elsewhere to identify what animals may contribute to the pollution, Powell said.

“If it is a human source, then we can track it down,” he added.

The local clam committee also is working to restore depleted or damaged flats around the island. Some have been successful, some not, according to Herbert Carter Jr., another shellfish committee member. But he was enthusiastic about their latest effort that uses homemade seeding boxes that give juvenile clams a safe place to grow. They tried it in a few areas last year and the results were “great,” according to Carter. So this year, they hope to expand that effort and use the boxes on seven different places.

“I think we can make the flats so much better,” he said. “There’s definitely a payoff.”

The seeding projects are necessary, he said, in order to reestablish flats that have been damaged over the years.

“We’ve lost about 77 percent of the clam flats since 1976,” he said, laying the blame squarely on mussel dragging, which began that year and destroyed the mussel beds and clam flats, and on the state agencies which allowed them to do it.

Pollution and the loss of habitat are not the only issues facing clammers. Loss of access over traditional paths has become a problem and the state Legislature is now looking at several bills that could change the legal size limits on clams. There are also debates in Augusta about the limits of the intertidal zone where clamming takes place and other bills that, Billings said, could alter colonial law as it relates to the shoreline and the low water mark. She urged the small group at the meeting to read the laws which could impact landowners as well as diggers, and to contact lawmakers in Augusta.

Those bills, Thalhauser said, have been developed largely without discussion on the local levels, which increases the potential for errors. MCCF hopes to expand the co-management process to a regional effort that utilizes a Community Fisheries Action Roundtable (C-FAR) process that brings together fishermen, researchers and state agency managers in order to identify and tackle issues such as those now under discussion in Augusta. They worked with the scallop industry several years ago using C-FAR, he said, and thought it might benefit the clam fishery.

They have identified an area between the Penobscot River and Eastport that is dealing with similar issues. After two regional meetings with harvesters to try to identify some of those issues, they are now ready to bring in state managers at different levels and researchers who will add their knowledge to the local knowledge. A third meeting is scheduled for early in May to bring the different groups together to develop a unified voice and a comprehensive, informed approach to the fishery.