Deer Isle
Originally published in Island Ad-Vantages, April 30, 2020
Nobody said giving away lobster would be easy 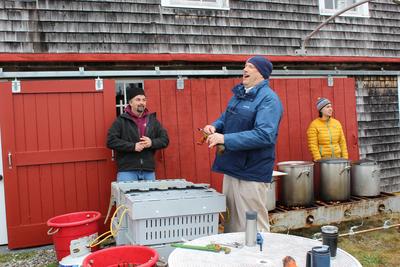 Dominc Zanke, Chris Elkington and Carla Guenther mix laughter with the business of cooking a lot of lobsters.

Brent Oliver came up with the idea as the price of lobster plummeted during the first few weeks of the COVID-19 pandemic. Why not donate excess lobster to a good cause? he thought.

Fishermen could take a charitable deduction on their taxes while holding back the product from a flooded seafood market. School children would also have tasty lunches.

“Let’s not glut the market and give it to the kids,” was how Oliver explained his thinking as he watched pots of lobsters boil over open fires at Edgewood Farm on Tuesday, April 28. That morning, fishermen and staff from the Maine Center for Coastal Fisheries had hauled 4-1/2 crates of lobster from Little Bay Lobster in Stonington, that had been donated anonymously, to Loring and Claudette Kydd’s farm. Joined by Community School District Superintendent Chris Elkington, they boiled the lobsters outside the barn. The cooked lobster meat was then taken to the Deer Isle-Stonington Elementary School. There volunteers picked it for the school staff to make into lobster rolls for distribution to several hundred Deer Isle and Stonington students.

That may have been the easy part.

In the beginning, MCCF agreed to run with the idea to donate lobsters when Oliver, a fisherman and board member, presented it. Pat Shepard, MCCF’s research specialist, coordinated the project. But first, Shepard had to find fishermen willing and able to donate lobster. Shifting circumstances along with weather made that a tough challenge.

“Not all fishermen are in a position to take a tax deduction,” Shepard said in a phone interview in early April. “Dealers were encouraging fishermen to bring their traps home.”

But then Brian Billings and Chip Proper donated the first 70 pounds of lobster, which went to feed Surry schoolchildren. The next donation, from silent donors, fed Brooklin and Sedgwick elementary students.

At Edgewood Farm on Tuesday, Carla Guenther, MCCF’s chief scientist, stood by the fire. It snowed that morning. For weeks, bad weather had made it hard for fishermen to get out. “Deer Isle-Stonington took the longest to coordinate because of the windy weather,” Guenther said.

While Guenther got warm, her husband, Dominic Zanke, pulled bands off lobster claws. “This is a new experience,” said Zanke, a fisherman. “Usually I’m putting them on.”