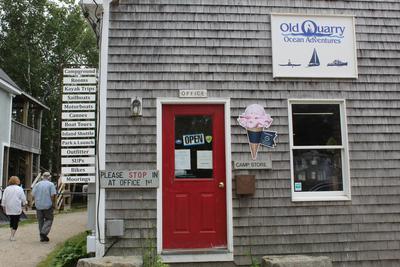 Before Old Quarry Ocean Adventures was sold to a private owner, the camp store signs told guests about the kayaks, canoes, sailboats and motorboats they could rent and launch from the campground’s shorefront. Now boaters and kayakers are crowding onto other public access launch sites in Stonington.

Old Quarry Ocean Adventures has been sold to a private party, causing people who might have used it to launch their boats and kayaks to go elsewhere. The result: crowds and problems at public launch sites, say town officials and users.

At the August 17 Stonington Select Board meeting, Town Manager Kathleen Billings said kayakers and boaters are now causing problems such as trash and crowding at Sand Beach. People are also sleeping overnight in their cars on Hagen Dock, where the public floats are located.

“With Old Quarry closed, this has made a big impact,” Billings said.

Former owner Bill Baker in an email said the sale of Old Quarry closed on August 1. According to a deed registered with Hancock County, the buyer is a Delaware-based limited liability company with an address at the Untracht Early accounting firm in Florham Park, N.J. David Untracht is the senior partner in the firm.

Until he retired, Baker for 22 years operated the campground, which included 18 campsites on 8-1/2 acres. The property also has 1,000 feet of deepwater frontage, which gave kayakers and boaters access to the 60 islands surrounding Deer Isle. Baker said in an email he had hoped to preserve the easy public access to the islands, which is otherwise scarce in the towns of Deer Isle and Stonington. Much deepwater frontage is in private hands or has limited parking, according to town officials.

At the select board meeting, Selectman John Steed said he saw one boat trailer that took up three parking spaces at Sand Beach. He also noticed the impact of the new crowds on the property. “It’s really getting beaten down,” he said.

Michael Daugherty with his wife Rebecca owns Upwest & Downeast kayak guide service. They used Old Quarry before it closed. “Old Quarry was under appreciated by some people,” he said in a phone interview.

Now the Daughertys launch from Colwell Ramp, which Michael said has gotten busier since Old Quarry closed. Sometimes, he said, it’s a hassle to use it.

People can take their time launching their boats there, he said, “and have no clue there’s someone after them.”

Billings urged the select board to adopt ordinances and policies governing public access to the waterfront.

Baker, in a letter to his customers earlier this summer, said he tried to preserve public access to the islands. He wrote that he reached out to different agencies including the State of Maine, Maine Coast Heritage Trust, Island Heritage Trust, Maine Island Trail and Chewonki Foundation. Collectively, those groups owned or had easements on 32 islands.

Baker met last fall with all of those groups at Old Quarry, and “everyone at the table knew and vocalized about the importance of Old Quarry to allow access and parking to the many islands,” he wrote. However, they couldn’t muster the resources to buy the property.

Until August, the campground was open on a limited basis, offering camping, kayak rentals and half-day kayak excursions. But then on August 1, it closed.

“I am so sorry that I could not pass this place on in perpetuity to the general public,” wrote Baker, who now lives in Greenville.