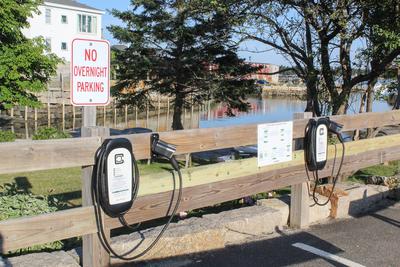 These new EV chargers will be operating soon at Small Cove.

Two charging stations on Atlantic Avenue will soon be able to keep electric vehicles up and running as well as attract visitors and foundation money, according to a town official.

The Public Works Department was putting the finishing touches on the electric vehicle (EV) charging area, according to Henry Teverow, economic developer, in an email on August 4.

“They should be ready to go by next week,” Teverow said.

Each charging station will bill users for electricity, so as not to encumber taxpayers with energy bills, Teverow said. According to the town’s parking ordinance, people may park and charge their vehicles for an hour.

According to Teverow, people will have an app on their phone into which they’ve entered information about their credit or debit card. They’ll tap the app, plug in the vehicle and then, when they’re done charging, the app will automatically bill the card for the amount of energy consumed. Teverow said it’s about $2 an hour.

Stonington may also be able to leverage the EV charger for other green initiatives such as planning for sea level rise. State and federal governments will see that Stonington is investing responsibly for the future, Teverow said. “It puts us in a good position to receive grant funding for other environmentally minded projects,” he said.

Finally, he said, increasing the use of environmentally friendly EVs will help preserve the town’s natural beauty. The EV charger “is a way for us to promote practices that retain the qualities we love about Stonington,” he said.