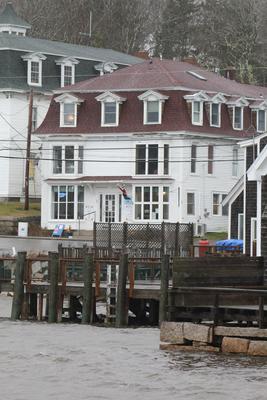 The Harbor Cafe has been serving up seafood and New England comfort food from this location for 22 years.

An effort to save the Harbor Café and its 12 jobs raised more than $15,000 within a week through a Facebook fund-raiser started by former employee Aimee Brown.

Brown created the “Save the Harbor Café” post on November 25, with the message, “An iconic Stonington business is in danger of closing!” By December 1, 160 people—including two other Stonington restaurateurs, Tony Bray and Andy Chappell—had donated $15,347.

Brown said the response amazed her. “I did not expect it one bit!” she said in an email. “I’m just hoping it’s enough.”

Delbert Gross, who has owned the Main Street eatery for 22 years, said he’s torn about accepting the money because he’s not sure it will prevent him from closing.

“It’s still going to be a struggle,” he said in a phone interview.

The Harbor Café is especially popular with fishermen, who in the early morning wait outside in their trucks for it to open for breakfast. Day trippers, summer visitors and year-rounders also patronize the restaurant, which serves seafood and what one customer called “New England comfort food.” Brown said she’s especially fond of the Reuben melt.

In past winters, the Harbor Café has been the only restaurant open on the island.

Since March, the COVID-19 pandemic has hurt business, Gross said, costing him a third of his revenue. He owes the landlord rent, he said, and in late November the Stonington Water Company threatened to shut off his water for nonpayment.

Aimee Brown knew of the restaurant’s financial problems because her mother, Katie Thompson, works there.

“She was stressed and already looking for another job in case the worst were to come for the business,” Brown said. “But like many here have found out, year-round jobs can be hard to come by if you’re looking to stay on island. It made me so sad to think the Café could be gone.”

So without telling Gross, she asked her mother and two other employees how much they thought he needed. They came up with $20,000.

“I see a lot of fund-raisers on Facebook and thought, ‘why not’?” she said. “I was nervous Delbert would be upset if I made one and made it public knowledge that the business was struggling, but I figured, ‘Hey what’s the harm?’”

Gross said he wished she’d checked with him. “What do you do? Her heart was in the right place,” he said. “I hope we can put it to use and put it to work and make everybody happy.”

He is thankful, though, for the fund-raiser, he said. “If I have to fold up and get a real job, so be it,” he said. But he has 12 employees who will lose out, and he doesn’t see a lot of job openings.

“Hopefully the powers [that be] will come up with something that will help all the businesses,” he said.