Deer Isle
Originally published in Island Ad-Vantages, July 2, 2020
An island timeout for Black Lives Matter actions
But what happens next? 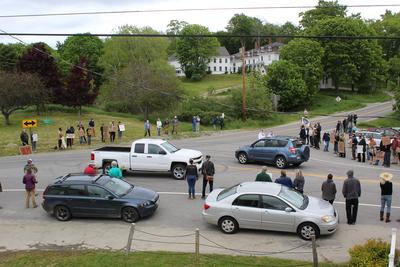 People stand in Deer Isle Village on June 7 in solidarity with the Black Lives Matter movement, but took a break this past weekend.

Three straight weekends of Black Lives Matter protests and vigils have ended on the island, for now, say organizers, and so has the sign defacing and graffiti wars.

More large gatherings of people holding “BLM” signs in Deer Isle village are unlikely, say organizers. The noose incident is in the hands of the state police, and provocative signs in Little Deer Isle have disappeared.

About a dozen people interviewed on the island say it’s time to calm down and get past the Black Lives Matter turbulence, which came in the midst of the upheaval and anxiety of the COVID-19 pandemic. Some are concerned the noose and the tit-for-tat vandalism damaged the island’s reputation. And most say they’d welcome a conversation about what, in the end, the conflict was all about.

Some say the island doesn’t have a problem with racism, but others say the racism has been exposed. Still others think the tensions over Black Lives Matter expose fault lines between island families and people from away.

Kaolin Pitcher, who initiated the first two gatherings in Deer Isle village, said at a candlelight vigil on June 20 that the community wasn’t ready for protests. She said she still intends to work to protect black people from police brutality, but to do so quietly. “We have to meet people where they are at, and we have to be patient,” she said. Pitcher did not respond to a request for another interview.

Mina Mattes, who organized the June 21 Black Lives Matter protest in Deer Isle village, said in a recent phone interview she plans to keep protesting in Blue Hill. As for the island, she said, “it’s not up to me.” But she pledged to continue, “whatever way is the best way for the conversation to continue.”

Mattes said the actions inspired discussions about race that hadn’t happened before. “Talking about race is important, and if we don’t talk about it how will we ever know how to move forward?” she said.

However, she said, too much conflict is counterproductive. “You want to stir the pot to have the conversation, but you don’t want to set the pot on fire.”

Jill Anderson Larrabee, who grew up on the island, said the large Deer Isle gatherings exposed differences between people who have lived elsewhere and people who have spent all their lives here. She was surprised, for example, to talk to her sister in suburban Maryland who told her matter-of-factly that she was going to a protest.

“There, it’s just part of your lifestyle,” Larrabee said in an interview. “Here, people either see it as some sort of dangerous upheaval or as something that’s not going to make a bit of difference. What’s really accomplished by going out at two on a Sunday afternoon and standing by the side of a road?”

Shortly after the first Black Lives Matter protest on the island, Dana Parker put a “White Lives Matter” sign on his Little Deer Isle property. It became a lightning rod. People drove by and gave him the finger, he said, and every time someone defaced his sign, he repainted it and added another. Finally on the night of June 25, someone cut down his signs, Parker said in a phone interview.

He decided not to put another one up.

“I’m only egging them on by contributing to the controversy,” he said. “There’s no sense in it. Let it lie.”

He said Black Lives Matter supporters should go to New York or Philadelphia to help people there.

And one thing puzzles him, he said.

“Why did it hit so hard in this little teeny fishing village when one teeny little sign goes up?” he said.

One reason was the noose that someone hung on a utility line near the causeway on the night of June 19. Though cut down at sunrise by Jason Lepper, a former police officer from Blue Hill, the noose reverberated beyond the island.

The New York Post covered the story, and the Maine State Police are investigating what many call a hate crime. Three towns have gone on record condemning racism in general and the noose in particular. Deer Isle and Stonington issued a joint statement last week urging both sides to calm down. The Sedgwick select board on June 29 stated, “The shocking threats of bodily harm, harassment, criminal trespass and vandalism committed in recent days have left many to be concerned for their safety and security.” (See accompanying story.) Stonington Town Manager Kathleen Billings said she’s pressured the Maine State Police through the Hancock County Sheriff’s Office to find the culprit.

She wants to know why the person or persons hung the noose, “so we all can know what we are really dealing with to move forward,” she said in an email. “Is there a true racist here? Was it protesters adding fuel to the fire to bring attention to their cause?”

The action, she said, has brought “hurt and bad press and blanket statements about the island.”

“I feel it is important to relay to the individual or individuals who did this hate crime our outrage of being economically ostracized and boycotted across the state and world and labeled racists so we can move forward,” Billings said.

SooZin Cha, an Asian-American graduate of Deer Isle-Stonington High School in 2018, lives a mile from the spot where the noose was hung. “That night was scary,” she said in a phone interview. She wondered if someone was going to come and do something to her and her mom.

Cha said she’d never felt threatened growing up on the island, but her classmates sometimes made her uncomfortable. They called her “Ching-Chong” and asked why her eyes were so small.

Then during the last presidential election, she said, some of her classmates went down the hallway shouting, “White power!” A teacher pulled her aside and asked if she was okay, a gesture for which she is grateful, she said.

Cha supports the Black Lives Matter movement and says she’s glad people are talking about it. It’s important, she said, to “get over the defensive part and start listening to people.”

What are we afraid of?

Ann Hooke, who moved to Mountainville with her husband Roger in 1984, stood with the protesters at the Black Lives Matter actions in Deer Isle.

“We do have some pretty significant issues in terms of race and also class, and those were exposed,” she said in a phone interview. “I’ve been uncomfortable for a long time not really feeling welcome on the island.”

Hooke said she wants people to talk over their differences, perhaps at the Reach Center for the Performing Arts. “I would like to see an open discussion,” she said. “What are we each afraid of?”