Blue Hill
Originally published in The Weekly Packet, July 2, 2020
BLM supporters stand up, again, in Blue Hill
‘So you came to a protest—now what?’ 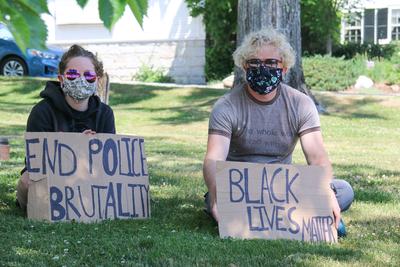 Magpie and Nathan Rutenbeck of Brooklin show their support for Black Lives Matter at a June 28 downtown Blue Hill demonstration.

Dozens of local Black Lives Matter supporters returned to Blue Hill on Sunday, June 28, to protest police brutality and racism and advocate for reform in front of Town Hall.

The peaceful gathering displayed face coverings, signs, social distancing, information and conversation, all under sunny skies and near-constant honks in support from passing motorists, holding signs to display their messages.

“A lot of people seem to think [when] it stopped being trendy, they can go home,” Blue Hill resident Grace Fitzpatrick said. “When really not anything has changed. It’s important to keep showing up until change happens.”

Another gathering is slated to happen this weekend, according to one organizer, Mina Mattes, who wrote “Stay tuned” on her Facebook page, where she shares information, thoughts and plans on the local and national movement.

Penobscot resident Mara Vandiver continues to show up to BLM vigils and protests to show her support. “There’s a lot of systemic racism in Maine that’s not addressed,” she said. “The more we can show up in support, the more those voices will be heard.”

Emma Larson-Whittaker, also from Penobscot, agreed. “I think it’s important to realize this moment is going to end….But social movements take a lot of time. As a white person the most important thing I can do is be there physically and stand up in a transparent way for those [for whom] it’s not safe to be here.”

Alex Yap, an international George Stevens Academy student unable to fly home, showed up for his first BLM event. What made him come? “Widespread injustice, I suppose,” he said.

While many, if not most, of the attendees were high school or college students or in between, older generations also showed up in support. One couple, Douglas MacGregor and Wendy Norling, drove from Lamoine.

“We recognize racism has been a part of our society for hundreds of years and want to contribute to change,” MacGregor said.

Norling added: “And working to educate ourselves on white privilege and systemic racism [after] growing up in New England in the 50s and 60s in suburban communities and mainly white neighborhoods.”

For those interested in more ways to support the BLM movement, information was also available on site under the heading: “So you came to a protest—now what?” 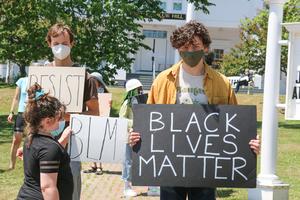 Many but not all of the dozens who showed up at a June 28 Black Lives Matter protest in Blue Hill were young adults. 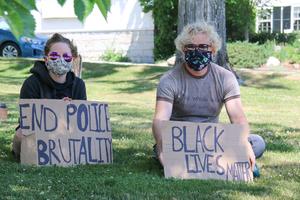 Magpie and Nathan Rutenbeck of Brooklin show their support for Black Lives Matter at a June 28 downtown Blue Hill demonstration. 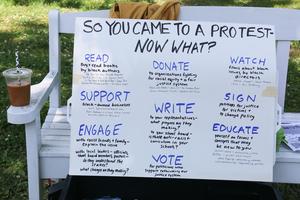