Stonington
Originally published in Island Ad-Vantages, July 23, 2020
OFIP seeks to bring needle exchange to the island
But Stonington Select Board says not at the old school 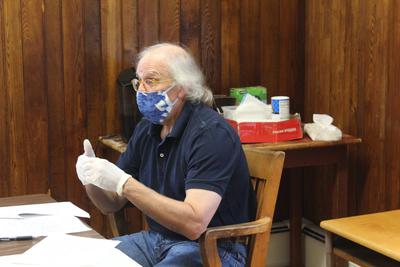 Charlie Osborn, co-chairman of the Opiate-Free Island Partnership, explains to the Stonington Select Board how a needle exchange would work on the island.

The Stonington Select Board on July 20 voted against letting the former Stonington School be used as a site for a needle exchange program.

Charlie Osborn, co-chair of the Opiate-Free Island Partnership, had come to the board seeking feedback on the group’s proposal to bring a needle exchange to the island. Needle exchanges allow people who inject drugs to turn in their dirty needles for clean ones.

Osborn asked what the Select Board thought of holding the program in town. “Is the school building OK?” he asked.

“I don’t think people have a problem helping people,” said Select Board Chair Donna Brewer. But, she said, “I don’t want it in that building.”

Brewer suggested the Island Medical Center would be a better location for a needle exchange, and Osborn agreed to reach out to them.

The board then took a vote, 4-0, with John Steed abstaining, against letting a needle exchange program into the former school.

Hancock County, the smallest unit broken out by the study, has 4 percent of the state’s population. In the last quarter of 2019 the county accounted for 2 percent of Maine’s drug overdose deaths, and in the first quarter of 2020 3 percent.

Selectman John Robbins said in a phone interview he’s opposed to a needle exchange. “I know there’s a drug problem here, but it’s not the taxpayer’s problem,” he said. “Why should we have a special place for you to have your illegal paraphernalia for free?”

Osborn said the reasons for needle exchanges are threefold. They prevent the spread of disease, they’re a gateway to getting treatment and they reduce the number of needles discarded along the roadside.

Island Heritage Trust favors a needle exchange, Osborn said, because of the syringes and drug paraphernalia found in the IHT parking lots.

Were OFIP to find a site for a needle exchange, a group called the Health Equity Alliance would certify and supervise the program, Osborn said.

Maine has needle exchanges in Lewiston, Portland, Ellsworth, Augusta, Bangor and Machias, according to the Maine Center for Disease Control and Prevention.