Deer Isle
Originally published in Island Ad-Vantages, July 23, 2020
Shepard joins CSD board after narrowest of victories
In recount, edges Greenlaw by one vote 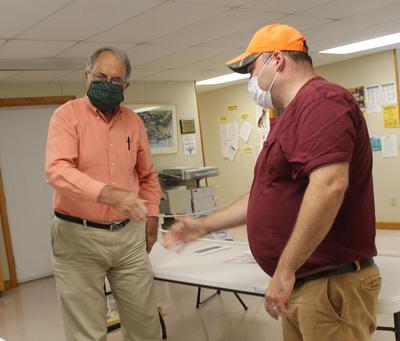 Skip Greenlaw, at left, prepares to shake hands with Bill Shepard in the Deer Isle town offices on July 17 after the final count came in. Shepard won the Community School District board seat by one vote.

After narrowly defeating Skip Greenlaw, Bill Shepard prepared to take his seat on the Community School District board for the first time at its July 24 meeting.

By a single vote, Shepard won the seat over Greenlaw, the incumbent, on July 17 after several hours of ballot counting, recounting and more recounting, first in Stonington and then in Deer Isle town offices.

Three days earlier, Shepard had outpolled Greenlaw by only four votes, 461 to 457, in the balloting that coincided with the state’s primary election. Shepard won by six votes in Stonington, 157-151, but Greenlaw got two more votes in Deer Isle, 306 to 304.

Greenlaw then asked for a recount, and the two town clerks agreed on the date to count the ballots again.

Stonington’s recount came first, at 10 in the morning. When it was all over, Greenlaw gained three votes as the total came to 157 Shepard to 154 Greenlaw.

Stonington Town Clerk Diane Hardie concluded there had been an error in addition in the original ballot count, she said after the recount.

That meant if the Deer Isle vote totals didn’t change, Shepard would win by one vote.

“You guys know how to bring a little excitement,” said Deer Isle Town Clerk Heather Cormier as Greenlaw and Shepard arrived that afternoon to watch that town’s recount.

Then, for about an hour, Cormier and Town Treasurer Judy Dunham separated ballots into piles and counted them. When they finished, Cormier told the two candidates the votes were still 306-304. Shepard had won by a one vote total from both towns’ balloting.

Greenlaw and Shepard then shook hands.

Cormier reminded Greenlaw that there’s another election for school board in March, and urged him to run again.