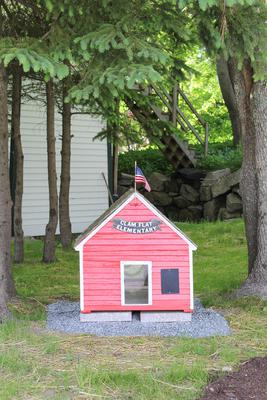 This is the building that was vandalized over the weekend. Town workers removed it on Saturday, and took away the rest of the Mini Village on Monday.

The town crew removed the Mini Village from the park on Main Street on July 27 after someone vandalized the handmade schoolhouse, breaking a window and defacing it with political graffiti, according to Town Manager Kathleen Billings.

Over the winter and spring, volunteers had carefully restored and furnished the houses, church, general store, schoolhouse, bed and breakfast and gas station. The Public Works Department this spring reseeded the park, built stone foundations and lit the buildings up at night.

“It’s like spray painting kittens,” Billings said in a phone interview. “This to me just crossed the line.”

Billings declined to say what the political message was.

The Mini Village has been a local icon for seven decades, first at the home of its creator, Everett Knowlton, and then at the park on Main Street. But it is only the latest property defaced by mischief makers this summer. Throughout the island and peninsula, towns and the state transportation department have since June been removing signs and spray-painted obscenities, political slogans and symbols from private and public property.

Hancock County Chief Deputy Sheriff Pat Kane said his office isn’t handling the Mini Village case, but they are working with the Maine State Police to curb graffiti and vandalism. Kane, who visited the Mini Village as a child, said the vandalism is a problem no matter what the political message is.

“Nobody has a right to damage someone else’s property,” he said in a phone interview. “They can certainly express their views without destroying people’s property, especially that little village.”

Billings said she was “absolutely sick” when she first learned on Saturday the school house had been damaged.

Patty Oliver, who heads the Public Works Department, cried when she heard the news, she said. She had spent days landscaping the park with Carl Shahan and bought flowers for the park with her own money.

“People are irate,” said Oliver in an interview. “They’re calling whoever did it ignorant and selfish.”

During the summer, people had eaten ice cream, drunk coffee and chatted in the park, while small children peered into the windows. Sturdee’s Store was stocked with miniature groceries down to tiny boxes of Rice Krispies and the church featured pews full of dolls facing a wild-haired minister.

“The little village should be hands off to anybody trying to send some kind of message,” Billings said. “It’s just something for little kids and families to enjoy and it’s something Stonington is known for.”

Billings said the town won’t bring the Mini Village back until it’s safe to do so.