Stonington
Originally published in Island Ad-Vantages, July 30, 2020
What a life Stevie Robbins had
Church of the Morning After just a part of it

Inside an old trap shop on West Main Street down by the harbor, Stevie Robbins for many years played his guitar and sang on Sunday mornings, starting at 7 a.m. Anyone who wanted to could join him, and many did. They played songs like “Sunday Morning Coming Down,” “Blue Eyes Crying in the Rain,” “One Day at a Time.” They called themselves The Church of the Morning After.

The shop was crammed with lobster traps, coiled rope, pot buoys and tools. Funny little drawings and original art hung on the walls, along with a poster of Johnny Cash flipping the bird.

Word about the Church spread, and in 2010, Stevie and his brother Brian played at the Collins Center for the Performing Arts in Orono with John McEuen of the Nitty Gritty Dirt Band.

Backstage, he turned to his brother Brian and said, “God, Bri … what a life, huh?”

He was a highline fishermen, one of the first to fish off the Georges Banks. A master boat handler and lobster catcher, he was tough and strong and determined, said Brian in a phone interview. “He could walk across your living room floor and there’d be a lobster hanging off his pant-leg by the time he got to the other end,” he said.

Brian, 14 years younger than Stevie, said his brother was always his hero. The qualities he admired in him—”the humor, the storytelling, the drive, the push, the doing things right,” he said—came from their parents, Shirley and Steve.

When Stevie was born on Christmas Eve in 1943, Shirley didn’t know if his father was dead or alive. All she knew was that he was off fighting World War II and that his company had been ambushed in a Philippines jungle. He didn’t come home until Stevie was 6 or 8 months old, Brian said.

They lived in Clam City, now Indian Point, across from the Stephen Pace House. The Robbins house isn’t there anymore. Stevie grew up big, 6’4”, and in high school he starred in basketball, playing on the Stonington Rockets team that won the state championship. Then he went to the Maine Maritime Academy for a year and a half.

A basketball game cut short his academic career. One night, Stevie and several other cadets went to a game, perhaps in New Brunswick, and returned late, Brian said.

“The other cadets came from families that had influence,” Brian said. “Pa was a hard worker, but he was a lobster fishermen and herring seiner.” So Stevie was the one who got expelled, he said.

Ralph Barter, who knew people at the Maine Maritime Academy, offered to get Stevie back in, said Brian. “Stevie said, ‘Thank you sir, I gotta get out of this on my own.’”

That was 1963, and as a 20-year-old he could have been drafted to fight in Vietnam. Instead he got a job on a research vessel in Antarctica and did a stint on a bomb vessel.

“He did his time, he earned his way out of his mistakes,” Brian said.

Between trips, he got married. He had romanced Brucine Eaton in high school, said Brian, when he was going herring seining with his father and uncle. They would set out twine to catch the fish and then pull the packet up. He would play his guitar for Brucine and sing, “Because you’re mine, I pull the twine.”

At first he fished inshore with Brian. Then the stories about the offshore fishermen, Bob Brown and Benny Beal, started to trickle down to the Robbins boys. In 1977, they set out for the offshore grounds in the 44’ Shirley and Freeman, named for his mother and grandfather. At first, they had little luck. What they did catch they sold to Clyde Conary.

In a documentary filmed in 1991, Stevie explained how he got through it. “When it got…discouragin’, I’d make believe I was getting ‘em, that would keep me going,” he said.

He also used to sing at the top of his lungs when no one was there, he said. It made him feel better.

Finally they hit the jackpot at the lower end of Crowell Basin, 180 miles and 18 hours from home.

Stevie fished offshore for 20 years. Eventually he got a bigger boat, the 54’ Stacie Vea, named after his daughter. Eventually he was taking crews of three and four out to the Georges Banks.

“He was a driver,” Brian said. “You just went. He didn’t chase people, he found his places. He just loved it.”

Even when he was weakened by chemo, he went out and caught lobster along the shoals of Isle au Haut where he’d fished as a boy, said Brian.

A few years after Stevie returned to the island, Brucine’s uncle, Vic Haskell, bought a building near his grocery store on West Main. He offered it to Stevie to use it as a workshop.

Brian and Stevie were spending long days fishing together and working on their gear. After one of those long days in the shop they’d sit round with their guitars and play a little tune, said Brian.

“Then maybe one Sunday, Eric Beckman came over from Vinalhaven with his bass,” he said. A group started to gather, and someone joked he was going to church.

Then in the late ‘70s, Victor sold the building, “We were scared to death we’d have to get out of there,” Brian said.

“The folks that bought it, they’re walking around, oohing and aahing. After some conversations with Victor, the people who bought the building, they asked Stevie if he would still stay. Would he run the heat in the winter? “‘Oh yeah.’

“‘Oh can you still keep the traps outside, put some rope out’?”

The shop over the years has had several owners, Brian said. The story was always the same: They asked Stevie to stay.

Brian went to work as a writer for Commercial Fisheries News and became a published book author. He’d come by the shop to play music, and over the years he watched the Church of the Morning After evolve.

“I was a visitor to this thing that just happened,” he said.

When Stevie got sick last year, the Church of the Morning After moved to the Odd Fellows Hall down the street. “I think Steve was very happy that we continued it,” said Lynn Parisi-Winters, a churchgoer, in an email. They stopped in March when the COVID appeared. Then when the weather warmed up they began to play again in undisclosed locations, fearing a crowd would gather, she said.

They thought about a memorial concert for Stevie Robbins, and maybe they will. But as Lori Connor, a frequent churchgoer said, “Every time we play, we honor Stevie.” 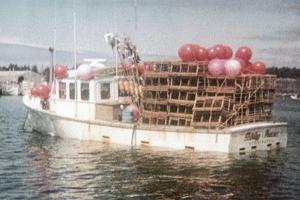 The 44’ Shirley and Freeman with 88 wooden four-foot traps. Launched in August of 1977, she was the first boat in which Steve and Brian Robbins went offshore. 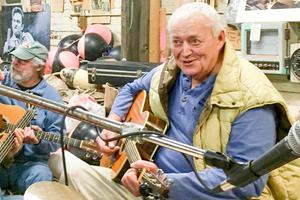 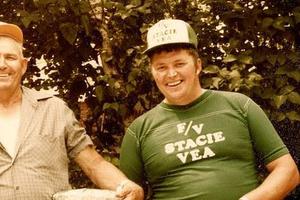 Brian, Steve, or “Pa,” and Stevie Robbins. “To most folks around here, he grew up as “Stevie” and Pa was “Steve,” said Brian.