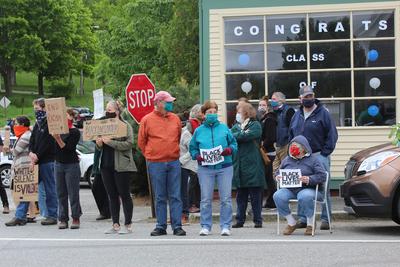 After a week in which Maine protests spread from Portland to Bangor to Ellsworth to Blue Hill, 115 island residents stood in Deer Isle village on Sunday, June 7, and held signs that said, “Black Lives Matter.”

Ginger Reiman said she came out to protest in solidarity with everyone else who’s protesting police brutality. “I protest whenever I can,” she said.

Protesters lined up along Route 15 and on either side of Main Street. Many cars and trucks honked in agreement with the signs, while some silently zoomed by and one driver stopped at the intersection and rolled down the window of his pickup truck.

Kaolin Pitcher initiated the protest on Friday night by sending some texts to friends and family, she said. “It was very last minute,” she said. “I think it’s real important for people to stand in solidarity.”

“Solidarity” and “ending racism” were the reasons most often given for why people came out to protest.

Frank Pitcher, Kaolin’s father, helped organize the protest because, he said, something has to change. “The system isn’t broken, it’s working the way it’s meant to—keeping people on the bottom,” he said. “It just needs to be different.”

Debby Marshall, an Island Peace and Justice member, said the protest was about peace and justice. “I think people have finally had enough,” she said. “We need to take it to the streets.”

Every protester followed Gov. Janet Mills’ recommendation that they wear face masks to prevent the spread of COVID-19. They did not, however, comply with her executive order restricting gatherings—indoor and out—to 50 people. 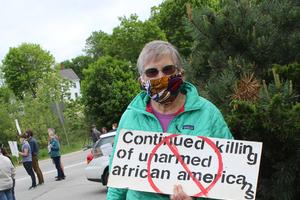 Ann Hooke was one of more than 100 people who came out on the afternoon of Sunday, June 7, for a Black Lives Matter protest. Some, like Hooke, carried Solomon’s seal stalks. 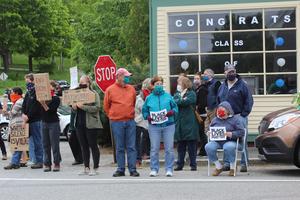 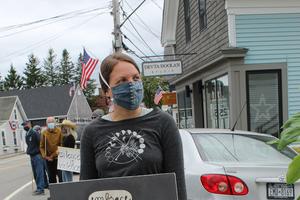 Elissa Nabozny, one of more than 100 people who came out on the afternoon of Sunday, June 7, for a Black Lives Matter protest. Nabozny, an herbalist, said the Solomon’s seal carried by some protesters “supports people in looking beyond limited perspectives.”