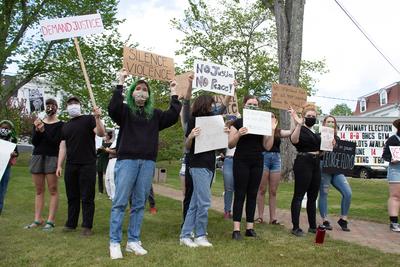 by Anne Berleant and Eli Forman

The nationwide struggle for racial justice took a local cast on Thursday, June 4, when a group of students rallied on the Blue Hill Town Hall lawn.

Organized by siblings Philomena and Oskar Mattes of Deer Isle, the rally was planned to coincide with a silent vigil in honor of George Floyd, killed by police in Minneapolis, held at the Blue Hill Congregational Church later in the afternoon.

The Mattes siblings are currently home from their respective colleges and were looking for ways to show solidarity with the country-wide movement.

“People should see that it’s in their community,” said Mena Mattes.

Mattes, a religious studies major at The New School in New York City, said that as she watched many of her peers get involved, she “didn’t want to feel like I was doing nothing.”

For several hours, protesters held signs and waved at passing traffic, receiving honks of support from many drivers.

At the outset, the event attracted 30 or so people with more arriving as the afternoon continued.

It appeared that everyone present wore face coverings.

One of the protesters, Jemima Fitzpatrick of Blue Hill, felt strongly about raising her voice in the community.

“It means a lot to me,” she said, adding “it’s a way to express your feelings and do something about it.”

Another, Magnolia Vandiver also of Blue Hill, said “racism is more invisible in Maine…people need to see this.”

“A lot of our voices in this area are used on social media,” said another protester, Justine Appel of Brooksville. “Being able to gather in public…is critical to spurring people to act.”

The Mattes siblings chose the lawn in front of the town hall for its visibility.

“Just about everybody who drives through Blue Hill can see you,” said Oskar Mattes.

In the course of the event, Chairman of the Blue Hill Selectmen Vaughn Leach stopped by to ask the protesters to stay on the grass.

The Mattes siblings also organized a similar protest that occurred on Saturday, June 6, in the same location.

Both expect to hold subsequent protests.

“We hope to be here for the foreseeable future,” said Mena Mattes.

The siblings encourage those wishing to get involved to donate to organizations fighting for racial justice including The National Bailout Fund, Movement for Black Lives and Black Lives Matter.

Up the street, the vigil was held at 2 p.m., coinciding with the memorial held for George Floyd in Minneapolis. The event was organized by the Rev. Dr. Deb Jenks with the Blue Hill Congregational Church. Silence was observed while church bells tolled “in memory and honor of George Floyd and all who have suffered and been killed because of their race or color,” wrote Jenks in a public letter.

The Reversing Falls Sanctuary also hosted two vigils in Brooksville, one on June 1 for COVID-19 victims and recent black victims of police violence, and on June 8, a Black Lives Matter vigil. For the latter, the ringing of the Buck’s Harbor Methodist Church bell was followed by eight minutes and 46 seconds of silence, the length of time a Minneapolis officer pressed his knee against Floyd’s neck, killing him.

“There was a general agreement that this silence seemed to last forever. It was very heavy,” attendee and organizer Gary Vencill said.

Readings and a brief discussion followed, with the approximately 20 people in attendance dispersing after a Celtic blessing. 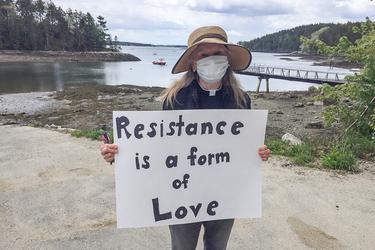 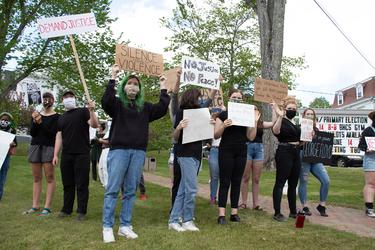 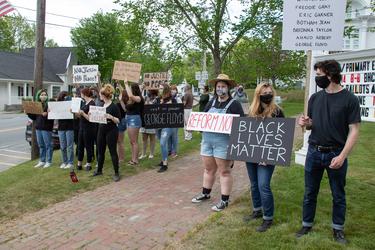 A group of students rallied for racial justice on the Blue Hill Town Hall lawn. 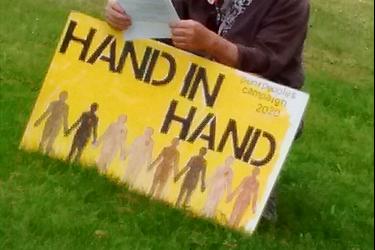