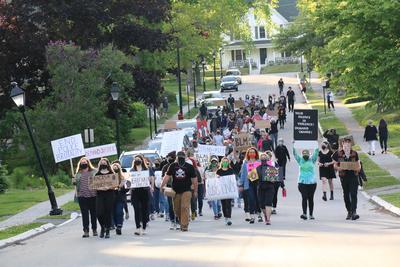 A peaceful protest in Castine June 9 in support of Black Lives Matter drew a large crowd to Fort George before marching to the waterfront.

With the sun slowly descending behind them, a large crowd spanning four generations gathered at Fort George Tuesday, June 9, to stand up for the Black Lives Matter movement before marching down to the waterfront.

Chanting the protest words ringing around the nation in the last week—I can’t breathe, Say their names—the marchers then shared, spoke and listened with Penobscot Bay as their backdrop.

Organized by Castine college student Margaret Goodson, who said she was spurred by similar protests in Ellsworth and Blue Hill. “I figured if it could work [there], it could work here,” she said.

Over 100 people were drawn to the protest, many for similar reasons.

“I want to be involved, and it’s hard to find where when we’re in such a small town,” Apple Lieser said. Her companion for the event, agreed. “It’s wonderful to have this opportunity,” Mike Coughlin said.

Rose Ergas said she saw the announcement on Facebook, had been unable to leave Castine for other protests, so had her children draw a sign and came.

“I think it’s easy in Maine [as] it’s a homogeneous state, to think we don’t have interest in racial justice,” Ergas said. “It’s important to let people know that we believe black lives matter, and we care.” 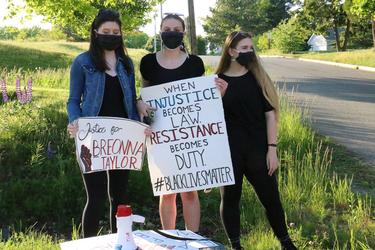 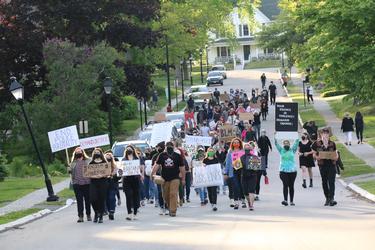 A peaceful protest in Castine June 9 in support of Black Lives Matter drew a large crowd to Fort George before marching to the waterfront. 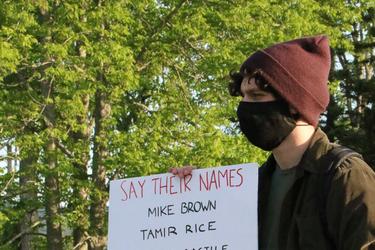 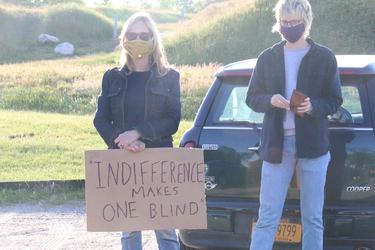