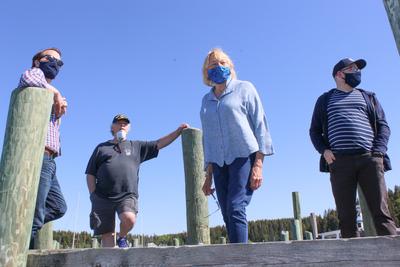 Everyone needs a day off now and then, especially on a beautiful spring day and especially when dealing with a pandemic, Black Lives Matter protests and a hurting state economy.

Those, at least, were the problems Janet Mills was facing as the governor of Maine. But on June 17, she took a road trip to Stonington to instead face sea breezes, wildflowers and purveyors of island victuals.

On a visit to Billings Diesel & Marine, the governor explained how she got there.

“I’m in Augusta,” she said. “I’ve been working at my desk for nine days. It’s awful. The lupines are blooming, I’m going to Stonington.”

So she packed her jeans and sneakers and headed down to Stonington with Matt Moonen, House majority leader, and Jeremy Kennedy, her chief of staff.

“She told me I needed a day off too,” Kennedy said.

Mills stayed at Boyce’s Motel, where owner Barrett Gray said she and her late husband Stan Kuklinski often put up while she was attorney general. “I was so honored,” wrote Gray in an email. He described her as “down-to-earth” and “appreciative.”

During her visit, the governor strolled down Main Street, shopped at Marlinespike, visited friends and took a boat ride with the Marine Patrol. Breakfast was at the Harbor Café, lunch at Ron’s Ice Cream and dinner at Aragosta at Goose Cove. Anwen Hudson, who served the governor a lobster roll at Ron’s, said she was a good tipper. “She seemed happy to be in town,” Hudson said.

Mills’ grandfather, Sumner Peter Mills, grew up in Stonington and represented the town in the state House of Representatives and Senate. The house he lived in, said the governor, is still in Burnt Cove, and he worked as a stonecutter on Crotch Island.

Mills’ father, Sumner Peter Mills Jr., was almost born in Stonington, she said. “It was 1911, before the bridge, and my grandmother was pregnant.” She refused to give birth on the island, Mills said, and the family moved to Farmington.

Mills used to come to Stonington every summer with her family. “It hasn’t changed a lot except the money people have come,” she said.

In 2006, Mills, then Maine’s attorney general, participated in the cemetery tour co-hosted by the Stonington Public Library and the Deer Isle-Stonington Historical Society. She re-enacted her ancestor, Myra T. Mills, in the Burnt Cove Cemetery.

“I came up in the fog and the mist in a long skirt, and I tried to raise money for the Historical Society. I probably lost them money,” she said.

On the morning of June 18, Stonington’s state representative, Genevieve McDonald, accompanied the governor and her colleagues to the Billings shipyard, where her husband Cory McDonald works.

They came to watch Billings’ workers haul the 72-year-old sardine carrier Pauline out of the water.

It was a day co-owner Peter Grindle called a “Chamber of Commerce Day”—sunny, warm, cloudless, with a mild breeze.

“I love to come to Stonington,” said the governor.