Deer Isle
Originally published in Island Ad-Vantages, June 25, 2020
Towns to protesters: Calm down and talk to each other 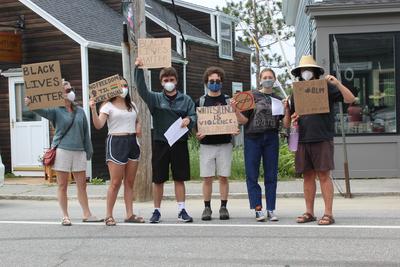 The Towns of Stonington and Deer Isle on June 21 issued a rare joint statement condemning racism after a noose was hung on a telephone wire in Little Deer Isle. (See Forum page 4 of this issue).

Police are investigating what many are calling a hate crime, but have yet to identify a culprit. The noose, though, was the latest and most alarming act in a series of provocations that have roiled the island over the past three weeks.

“Calm down and talk to each other,” was the message the towns sent. “We encourage and are willing to facilitate a thoughtful dialogue about race and class among the residents of Deer Isle and Stonington.”

The Black Lives Matter protests that followed the killing of George Floyd by a Minneapolis police officer spread to Deer Isle, which is unused to such demonstrations. Weekly protests, which began June 7 in Deer Isle village, were punctuated by candlelight vigils, graffiti, vandalism and arguments about race and outsiders.

The provocations about race come at a time of high anxiety on the island. The two main industries, lobster fishing and tourism, have been hit hard by the COVID-19 pandemic. Lobster prices have plummeted, and environmentalist lawsuits threaten severe restrictions on fishermen as soon as August. Business owners who depend on tourism wonder how long they can survive. Kids can’t play with their friends, parents have had to home school them and everyone is supposed to wear a mask.

Into that charged atmosphere came the Black Lives Matters actions. And, as the towns put it, “Several incidents have crossed the line from social dialogue to harassment, threat, trespass and vandalism.”

The sequence of events began at 2 p.m. June 7 when Deer Isle resident Kaolin Pitcher organized a peaceful Black Lives Matter vigil that some would call a protest. It was important, she said that day, to stand in solidarity with the national movement.

Every protester wore a mask, but the crowd of 115 violated the governor’s emergency order limiting gatherings to 50. They stood quietly at the intersection of Route 15 and Main Street in Deer Isle and held handmade signs. Few members of the fishing community attended the vigil that included artists, students, retirees and members of the Congregational Church and Island Peach & Justice.

Then the graffiti war began. A “Black Lives Matter” graffito appeared on the road at the site of the vigil. Up the road in Little Deer Isle, Dana Parker put a large sign saying “White Lives Matter” and “All Lives Matter” on his front lawn.

It didn’t take long for someone to spray paint the message on Parker’s sign. Someone else painted obscene images on the “Black Lives Matter” graffito in Deer Isle.

“It’s a tit-for-tat thing,” said Deer Isle Town Manager Jim Fisher in a phone interview. “I’d like to know who the people are who are doing it,” he said. Much of the vandalism happened at night.

Another Black Lives Matter vigil followed the next weekend in Deer Isle village. Parker’s sign was vandalized again and again. He painted over the spray-painted obscenities and added messages, such as, “Does your life matter?”

“Every time it gets vandalized, I add more to it,” Parker said in an interview.

On the afternoon of Friday, June 19, Black Lives Matter signs on the utility poles along the Deer Isle Causeway were torn down, and another series on Caterpillar Hill in Sedgwick was defaced.

Then as the sun set that day, people driving onto Little Deer Isle saw a noose dangling from a telephone wire. No one took public credit for the act, and people speculated on social media about who had done it. Racists? The Black Lives Matter people? A teenaged prankster?

Deer Isle resident Mina Mattes explained what happened a few days later during a meeting of Black Lives Matter protesters. She said she posted someone’s photo of the noose on Facebook. The story went viral on social media, she said. Newspapers across the state picked it up, and then the New York Post ran it.

Blue Hill resident Jason Lepper, a former police officer, saw the post on Facebook. He drove to Deer Isle at sunrise on Saturday morning and took the noose down with a pole saw.

Lepper said at least 30 hours passed before a state trooper came to pick up the noose as evidence. He was troubled by the lack of an immediate response, he said.

“The community could move forward more easily if we knew who did it or at least what the motivation was,” said Lepper in an email. “[Was it] a prank and ignorance of what the symbol represents or a true threat of violence and intimidation? To solve the problem we must figure out what is at the heart of something like this and then work on solutions.”

The Hancock County Sheriff’s Office said in a statement that several people called about the noose. And, it said, because of the call sharing agreement the case belonged to the Maine State Police. The sheriff’s office is assisting, and asking anyone with information about the incident to call 667-5697, option 9.

“The noose is the most potent and hateful symbol of racism in the island’s history,” said Mattes. Others said they were shocked and disturbed by it.

Deer Isle resident Rene Colson Hudson quietly organized a candlelight vigil on Saturday, June 20, in Little Deer Isle. As the sun set, at least 125 people stood quietly together, holding candles that illuminated their masks. There were no signs, no chanting.

“I felt it was very important as a community that we come together in peace, and share light and love in the midst of all the strain we’re under,” said Hudson. “We’re an anxious system. We need a non-anxious response.”

The noose convinced Kaolin Pitcher that the island was not ready for protest. “We have to meet people where they’re at, and we need to be patient,” she said.

“I thought I’d come out and mingle,” Ryan said as he stood with the others. “I think it’s great. I know some people here, and I’m here to support the people.”

The biggest Black Lives Matter action yet took place the next day, again in Deer Isle village. Mattes put the word out about the event. She brought a cooler full of water, masks and flyers about the history of racism in Maine.

While growing up in Deer Isle, she said, her few black classmates were very vocal about the racism they experienced.

“Black lives are the issue right now,” she said. “Everything needs to be changed.”

Again, the protesters—165 of them—stood in the village and quietly held signs. Many cars passing through honked or gave a thumbs up, but a few accelerated, presumably to show their disdain.

“I’m seeing a lot of new people,” Mattes said. “It’s really positive, it’s really good, it’s what I wanted it to be.”

It was not what Dana Parker wanted it to be. That afternoon, two people had driven up to his “White Lives Matter” sign and took photos of it, he said. They told him they’d come from Old Town. Then, he said, they went to the protest.

He put up a new sign: “The only hate on this island is what people bring here. Go home!”

Stonington Town Manager Kathleen Billings said she’s known Parker all her life. “Dana is the furthest person from a white supremacist that ever was,” Billings said in a phone interview.

“Historically, Mainers don’t like outsiders coming in and telling us what to do and that we have a problem,” she said.

She didn’t understand, though, what exactly the protesters hoped to accomplish. “Some of this doesn’t make sense except you want to wind up a whole lot of people,” she said.

And so to try to unwind the people, the towns put out a statement. “The recent dialogue about racism is important in Maine and the people of Deer Isle and Stonington should be engaged in understanding the effects of race and class in our communities.”

The noose sent a “very disturbing message of intolerance and violence,” the statement said, and “perpetrators of hate crimes should be brought to justice,”

But the statement also criticized trespass, vandalism of private property, graffiti and signs with vulgar language—of which both sides are guilty.

It didn’t go far enough for Stonington Selectman John Steed. “It doesn’t really condemn anything,” he said in an email. “There’s only one right side and only one side to condemn. We should condemn the racism we see on display and call out as racist the people who put a goddamn noose up.” 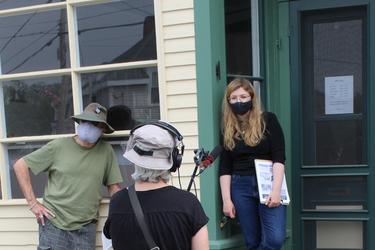 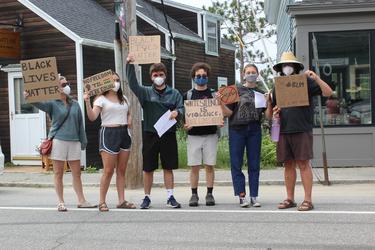 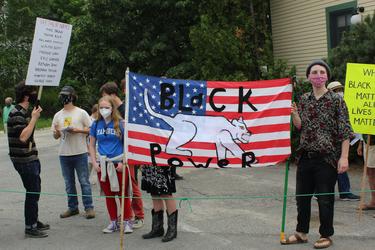 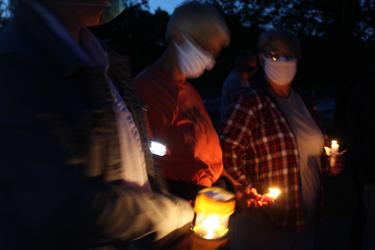 More than 100 people gather in Little Deer Isle for a candlelight vigil on June 20 after someone hung a noose from a telephone wire nearby.