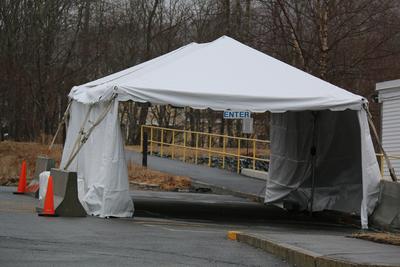 To help stem the spread of COVID-19, Northern Light Blue Hill Hospital erected a tent to administer tests for the coronavirus.

The Northern Light health system made the announcement about testing on March 17, when the number of people in Maine who tested positive for COVID-19 reached 23 confirmed and nine presumptive positive, according to the Maine Center for Disease Control and Prevention (CDC). That number rose to 30 confirmed and 13 presumptive the next day, according to Maine CDC. Presumptive positive cases are samples that test positive at non-governmental labs and are sent to the state Health and Environmental Testing Laboratory for validation.

The drive-up testing is a little more complicated than driving to a lemonade stand, said Dr. Michael Murnik, a doctor at Blue Hill Family Medicine.

First, people can call ahead for a screening and, if they have symptoms, they will be directed to drive to the clinic parking lot, Murnik said. There they will see a phone number on a sign, which they can call, and a staff member in protective garb will come out and administer the test.

The test involves a Q-tip up the nose for the COVID-19 virus, then a second Q-tip for flu and other illnesses. Test results will come back in 24 to 48 hours, Murnik said.

Northern Light Blue Hill Hospital has also set up a tent in its parking lot with the expectation that a different kind of testing for COVID-19 coronavirus will begin soon, according to spokeswoman Kelley Columber in an email.

Dr. James Jarvis, senior physician executive at Northern Light Eastern Maine Medical Center, said the COVID-19 test doesn’t work on people who don’t have symptoms. To limit the spread of the disease, Jarvis recommends staying six feet away from other people and washing hands frequently and for 40 seconds, rather than the 20 seconds widely recommended in the past few weeks.

Jarvis said Northern Light currently has enough staff to handle the COVID-19 pandemic. “Right now we are staffed and ready,” he said in a video news conference on March 16. He said, however, he’s concerned about potential staff shortages due to the virus.

The availability of protective gear is not yet an issue for the Northern Light health system, Jarvis said. But the pandemic is creating a demand for sanitation products that local stores are having a hard time filling.

Les Weed, chief financial officer at the Island Employee Cooperative (IEC) in Stonington, said he hasn’t had hand sanitizer or rubbing alcohol in the stores for weeks.

When the IEC supplier’s truck came 24 hours late on March 18, the toilet paper it brought was mostly gone within hours, Weed said in an email. The truck brought very few cleaning supplies and no hand sanitizer.

Many workers are at risk or live with people who are at risk of dying from COVID-19, so they are forced to stop work. The state Legislature on March 17 passed an emergency bill that lets the state pay unemployment benefits to people who can’t work because of COVID-19.

Weed said four of his 60 employees are taking leave because they live with people who can’t risk catching COVID-19. He planned to check into the expanded unemployment benefits for those workers.

“The legislation we passed last night to expand unemployment eligibility in response to COVID-19 will benefit workers in every county in Maine,” said state Rep. Genevieve McDonald in a March 18 statement.

When Gov. Janet Mills banned eating at restaurants and bars March 18, that left few public places open for people to see each other. Town halls, libraries, schools, courthouses and churches have shut their doors to the public.

Stonington yoga teacher Caroline Wybar planned to conduct a chair yoga class for residents of the Island Nursing Home via a video on Facebook on March 18. It will have been her sixth free class since she started teaching yoga on Facebook on March 14. More than 500 people have seen the videos, not just on Deer Isle but around the country.

“People say it is what is keeping them going, helping them find ease, especially those who live alone and are isolated,” Wybar said in an email.

The Healthy Island Project is working to stay connected with elderly residents on Deer Isle though its biweekly Salt Air Seniors luncheon was canceled. Barrett Gray spearheaded a project to deliver lunches to anyone who wants them on Mondays and Thursdays.

“Twice a week you will receive a friendly call from a volunteer who will do a quick wellness check and will let you know when to expect your HIP Lunch Box delivery,” reads the flier. “Feel free to open your door, the volunteer will not enter; if you’re feeling unwell, the volunteer will knock and leave your lunch outside your door.”

Gray said in an email that Marie Hutchinson, a Deer Isle resident, asked people to donate to the HIP Lunch Box project for her birthday and raised $500. Rene Colson Hudson, HIP executive director, also made a Facebook ask and raised $600.

Volunteers for Friends in Action, which arranges rides for seniors to medical appointments, have said they’ll deliver food and medicine to people who need it, according to its website. The organization is also setting up check-in calls to help fight loneliness. FIA is also providing masks and gloves to drivers who are still taking people to dialysis and chemotherapy.