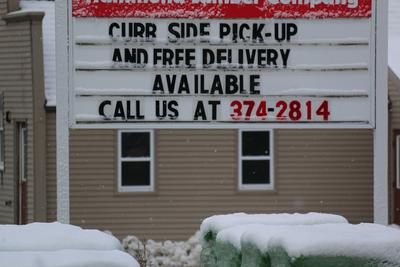 Local stores, such as Hammond Lumber in Blue Hill, are offering different ways to get their products.

Anticipating a big loss of jobs and a slowdown in commerce, governments and banks are taking steps to ease the financial pain they expect will result from the COVID-19 pandemic.

Businesses that depend on tourism are already taking a hit from the closure of restaurants and bars and the state ban on gatherings of 10 or more people.

The closing of casinos and cruise ships has hurt the demand for lobster. That’s a big problem for the peninsula and island. Stonington, for example, estimates in its Comprehensive Plan that lobster fishing generates three out of every four dollars of income produced in the town.

“It’s going to be a big economic slowdown,” said Stonington Selectman Evelyn Duncan at a selectmen’s meeting on March 16.

“There are no markets for the product”

Prices for seafood have plummeted as much as 75 percent, Gov. Janet Mills wrote in a letter to President Trump on March 20. “There are no markets for the product already in inventory,” she wrote.

Wholesale lobster prices have dropped to between $3.60 in Stonington and $1.50 in eastern Maine, said Paul Anderson, executive director of Maine Center for Coastal Fisheries.

Anderson noted that Maine’s Department of Marine Resources decided to not enforce the wet storage rule, which allows fishermen to leave their gear alone longer. That way, they can pull the traps when they feel like it or when the conditions are right.

While fishing and fishing-related businesses have slowed, some businesses are seeing an uptick in activity because of the COVID-19 outbreak.

The challenge for essential retail businesses such as grocery stores and pharmacies is to keep employees healthy and the product coming in, he said.

Many Blue Hill businesses are rightly concerned about what the pandemic might do to the important summer season, said Chrissy Beardsley Allen, president of the Blue Hill Peninsula Chamber of Commerce.

People have canceled some May reservations at inns and cottages around the peninsula and islands, but few are canceling for July and August, according to anecdotal evidence.

In Stonington and Deer Isle, the Island Agency has had a few cancellations for rental cottages, said owner Morgan Eaton.

“The silver lining is that the busiest part of our rental season and real estate season is months away,” Eaton wrote in an email. “We’re encouraging tenants to keep their reservations.”

Another silver lining to the pandemic: Buyers who’ve already looked at properties feel more strongly about wanting to move to Maine, Eaton said.

And the Federal Reserve’s emergency interest rate cut to 0 to 0.25 percent on March 15 is especially motivating year-round buyers, Eaton said. “Second home and investment buyers are also still in the market,” she said.

To ease the financial pressure on people who lost their jobs, Camden National Bank announced last week it will waive late fees on loan payments for up to 90 days. The bank will also waive penalties for early CD withdrawals. And for business customers, Camden National is offering other payment relief plans as well as help with government-sponsored financial support.

The Finance Authority of Maine (FAME) is offering short-term help for people and businesses who need cash because of the pandemic. Interest-free loans are available for employees, sole proprietors, 1099 workers or anyone who loses income as a result of the coronavirus outbreak. FAME also offers bridge loans to affected businesses until Small Business Administration disaster loan funding is available. People and businesses can access these loans through their lenders.

The Deer Isle-Stonington Chamber of Commerce is advising its members to document everything. “With all the money being spent or losses occurring due to the pandemic, businesses should carefully record what funds are being spent or lost and how it is related to the disaster,” the chamber wrote in an email to members. “From the federal government perspective, if something isn’t documented it did not happen.”