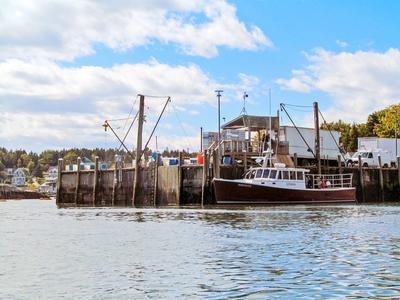 Stonington remains the top lobster fishing port in Maine, according to preliminary statistics released by the Maine Department of Marine Resources on March 6.

Despite a decline in the lobster harvest in 2019, Stonington remains the top lobster fishing port in Maine, according to preliminary statistics released by the Maine Department of Marine Resources on March 6.

Overall, the value of all Maine’s commercially harvested marine resources increased by more than $26 million over 2018 to $673,910,558, the second highest ever.

“Even with a slow start last year, Maine’s lobster industry ended the year strong, with landings picking up significantly in the last few months,” said DMR Commissioner Patrick Keliher in a statement.

“Last year the cold spring caused a delay in the molt which is when lobsters shed their shells and the bulk of the harvest occurs. Fishermen held off until the shed happened, so fishing was slow early but picked up later in the year,” said Keliher.

Though the value of seafood landings dropped in Stonington, Vinalhaven, Portland, Beals and Jonesport, it rose in Spruce Head, Owls Head, Harpswell and Bass Harbor. Two ports, Cundys Harbor and Rockland, fell out of the top 10.

Editor’s note: This story has been updated from the original version to include more information.