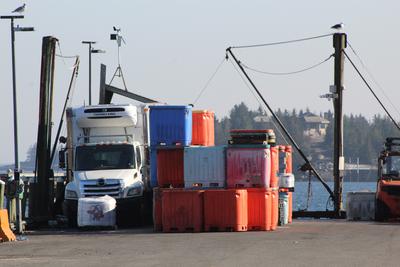 Fishermen complain there’s not much room to maneuver on the Fish Pier with crates, totes, bait, pallets and Xactics (bait coolers) taking up real estate.

The Stonington Select Board granted two lobster-buying permits on November 10 over the objection of the Harbor Committee. The two grantees, Hugh Reynolds of Greenhead Lobster and Drew Eaton, still have to submit paperwork and pay about $5,000 to get a permit.

The select board voted 4-1 to approve the permits, with Evelyn Duncan voting no. She and John Steed also voted later to overturn that vote, but lost 3-2.

Previously, only four people held permits to buy lobster on the Fish Pier. However, selectmen, lobster buyers, fishermen and Town Manager Kathleen Billings say the pier is too congested. The Harbor Committee, composed of local fishermen, is trying to fix the problem.

Complicating matters was the resignation of Harbormaster Raelene Pert in early November. “The way the politics and stuff was going, I didn’t want to deal with it,” Pert said in a phone interview.

On one side are those who say more permits mean more congestion. Others say the issue isn’t the number of permit holders, but the amount of gear and equipment allowed to sit on the Fish Pier.

“You could increase capacity by 20 percent by getting rid of the platform because it blocks the pier,” Brewer said. “There’s so much…bait, pallets, totes, that comes all the way to that hoist so you can’t get your trailer in to get what you need off.”

Duncan, the Harbor Committee’s select board representative, said it’s unwise to add buyers to a crowded pier when there isn’t a harbormaster to settle disputes.

Billings said granting the new permits set a precedent. “Right now we could have 40 people come in,” she said. “I would much rather take a cautious approach than get in a mess legally.”

Duncan said granting of the permits usurped the committee’s authority. “I feel it’s a slap in the face,” she said.

The Harbor Committee has had difficulty getting a quorum to its meetings. Only about 15 percent of the people who use the pier live in Stonington, said Donna Brewer, select board chair.

Brewer and Selectman John Robbins said fishermen used to have to take off everything at night that they’d brought to the pier in the morning. Brewer said the ordinance changed in 2015 to give the harbormaster discretion to let people leave equipment overnight.