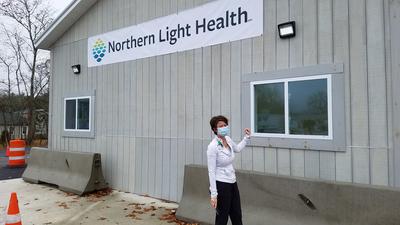 Kelley Columber, above left, of Northern Light Health, points to the drive-up check-in window of the Swab & Go COVID-19 testing facility that is available by appointment, 1-4 p.m., Monday through Friday, in the parking lot of the Blue Hill hospital.

As the state continues to ramp up its testing capacity for COVID-19, people on the Blue Hill peninsula and islands have a new option to find out if they have the virus. Northern Light Blue Hill Hospital is opening its drive-through “swab-and-go” site this week, spokesperson Kelley Columber said in a phone interview on November 10. Its hours are 1-4 p.m., Monday through Friday.

Health care workers at the sites collect samples and forward them to the state laboratory. It’s one of about two dozen sites with which the state has contracted to test people for COVID-19.

Though Gov. Janet Mills announced in a press release on July 21 that the sites would offer specimen collection for free, her executive order on who gets tested at them is silent on cost. In the Northern Light system, testing costs are determined by the type of test and insurance status of the patient, Columber said in an email.

Health and Human Services Commissioner Jean Lambrew also announced on November 10 two new testing sites, including one already up and running at Portland International Jetport. The other, at the Downtown Auburn Transportation center, should open soon, Lambrew said during a virtual news conference. To find out about testing at those two places, she suggested going to the covidtestforme.com website.

A lot of COVID

The number of new COVID-19 cases in Maine reached a record level of 204 on November 10, according to the Maine Center for Disease Control and Prevention (CDC). Those included eight active cases at the Maine Maritime Academy, according to the school’s website. Maine CDC reported Blue Hill has had six cases, and Dr. Charles Zelnick, family physician at Island Family Medicine in Stonington, said he had two reports on Friday of island residents with the virus.

Health officials have warned that the onset of cold weather would bring a spike in COVID-19 cases.

“The ground in Maine has been seeded with a lot of COVID cases,” Shah said. “There will now be clumps, outbreaks, throughout the state.”

“My biggest fear is that today’s community transmission will soon start to become, and snowball, into tomorrow’s outbreaks,” he said.

State health officials have said testing is essential to control the spread of COVID-19.

Residents of the peninsula and islands can get tested at Northern Light Maine Coast Hospital in Ellsworth, as well as at the Blue Hill hospital, Columber said. Northern Light, though, is not doing testing for COVID-19 at its Bucksport facility, she said.

To get a test, people who have a Northern Light doctor should contact him or her first, she said. Those who don’t can either go to the northernlighthealth.org testing website or call 844-489-1822.

To find the nearest testing center, go to the get-tested-covid19.org website.