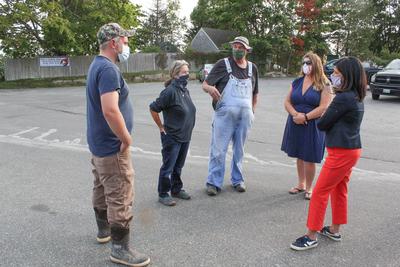 State Rep. Sara Gideon visited with a handful of fishermen and lobster dealers on September 22 as part of a costly campaign to unseat U.S. Sen. Susan Collins.

The Maine Senate race is the fourth most expensive in the United States, as the candidates and their supporters have raised $42 million so far, according to the most recent figures from the Open Secrets website. Gideon, the Democratic speaker of the Maine House of Representatives, has outraised her opponent, with $24 million to Collins’ $18 million.

One reason so much money has flowed into the campaigns is that the outcome could help determine control of the Senate. Republicans hold a narrow majority of 53 to 45, with two independents caucusing with the Democrats. A Gideon victory over Collins, a Republican who has served 24 years in the Senate, could help shift power to the Democrats.

Gideon, who represents parts of Freeport and Pownal, cannot run for re-election because of term limits. When Collins first ran for the Senate in 1996, she promised to serve only two terms, according to the Democratic Party in 2007. Collins did not deny the charge.

‘Have you seen a whale?’

Gideon began her afternoon at the Maine Center for Coastal Fisheries, chatting with scientist Carla Guenther and Paul Anderson, executive director, and Jim Chesney, board chairman. She then strolled down Main Street to meet with Town Manager Kathleen Billings and Harbormaster Raelene Pert on the Fish Pier. A half dozen people stopped to talk with the candidate on the pier.

Gideon asked what they would want her to do if she were elected.

“That’s a really big issue for us,” said Oliver. “We’re going out of business because of whales that aren’t here.” Oliver was referring to federal rules that require lobstermen to take measures to save the Atlantic right whale.

“We have some very specific ideas about what we can do about it,” replied Gideon. Later, Gideon said she wants to let people buy into Medicare as a public option, a reform of the Affordable Care Act.

Gideon then drove to Fifield Lobster Co., where she met with Christina and Travis Fifield, siblings now running the family business for the fifth generation. Shawn Haskell Jr., drove up to the dock to unload his day’s catch, and gave Gideon a lobster to hold.

The Fifields told Gideon that they aren’t getting any of the $50 million in federal relief for the lobster industry. The money, which makes up for revenue lost because of retaliatory European Union tariffs, bypasses lobster dealers. Travis Fifield told Gideon the company bought lobster at a loss for six weeks during the beginning of the pandemic shutdown. “The dealers bore the brunt of the tariffs,” said state Rep. Genevieve McDonald, who accompanied Gideon on her waterfront tour.

Gideon also answered questions from reporters. As a fight looms over the Trump administration’s appointment of Amy Coney Barrett to the Supreme Court, Gideon was asked about a Democratic proposal to pack the court. “We need to restore the integrity of the judicial branch,” Gideon said. “The question is how it [court packing] gets us to an independent judiciary.”

GALLERY — Gideon takes her campaign to the waterfront 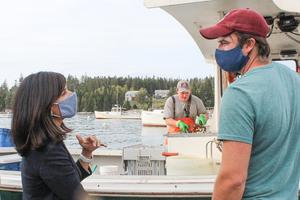 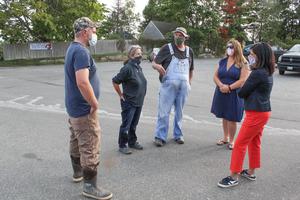