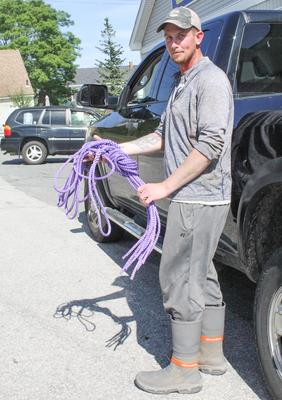 Fisherman Justin Brazier with the purple rope that distinguishes Maine lobster gear from New Hampshire or Massachusetts gear. Federal regulations require Maine lobstermen to use purple rope or rope somehow marked with purple as of September 1.

Regulations and relief checks along with fishing are making this a busy fall for the local lobster industry—on the water, in the workshop and on the proverbial kitchen table.

“There’s a lot happening at the moment from all angles,” said Christina Fifield, who runs the Fifield dealership with her brother Travis. “We’re just trying to hold on and make it through.

On the regulation front, the Maine lobster zone councils are in the process of voting on proposals for new gear requirements to protect the endangered right whale. At the same time, the National Oceanic and Atmospheric Administration (NOAA) is expected soon to announce a key step in writing a new whale-conservation rule, according to Maine Department of Marine Resources (DMR) Commissioner Patrick Kelliher.

There’s paperwork, too, for Maine’s lobster fishermen to receive their share of $50 million from the federal Seafood Trade Relief Program. Along with others along the seafood supply chain—lobster dealers, for example, or aquaculturists—lobstermen also have paperwork to fill out to get their share of CARES Act relief.

Local fishermen say it’s been an OK year. That’s better than many expected when the COVID-19 pandemic shut down restaurants, casinos and cruise ships, all big lobster consumers. The price fell to as low as a dollar a pound in April. Volumes have been low, but that, at least, has kept the price up. Today it’s about $3.85 a pound for shedders, according to Paul Anderson, executive director of the Maine Center for Coastal Fisheries.

“It’s not like a boom year, but it’s not awful,” Christina Fifield said.

This summer, Maine lobstermen also worked on marking their trap lines purple with paint or tags or splicing to comply with a new federal rule that took effect September 1. Fishermen in other lobstering states also had to mark their lines—but with other colors. That’s so regulators can tell where a trap line originated should a right whale get entangled in it.

“It’s expensive and time consuming to mark your lines for a whale no one has ever seen,” said Jenni Steele, co-owner of Island Fishing Gear.

Local fishermen say they’re being punished by regulations to protect right whales even though they don’t see any whales in the Gulf of Maine.

Their representatives—the Maine Lobstermen’s Association and the Maine Lobstering Union, Local 207—made that argument in a recent federal court case. The judge ruled NOAA has to come up with a new set of rules by May 30, 2021. More fishing gear modifications will be part of those rules.

The state DMR is working with the state’s lobster zone councils to propose fishing gear changes that will satisfy federal regulators. Those include limits on the number of traps that can be fished on each trawl in different sections of the fishery. They also include where to put weak points (such as a splice) in the trap lines, so a whale caught in a line can easily break away.

The lobster council for Zone C, which stretches from east Penobscot Bay to east Blue Hill Bay, voted in a September 23 virtual meeting to approve proposed trawl trap limits and weak points. But some fishermen, like Richard Larrabee Sr., fish in multiple zones, and different zones may have different gear requirements.

“Not every zone is going to be consistent, that’s for sure,” Kelliher said during the meeting. “You’ll have to jump through hoops if you want to fish in another zone.”

For example, Zone C wants one weak point halfway down the line from shore to three miles out. Beyond three miles, Zone C proposes each line have two weak points, one a quarter way down, another halfway down. But Zone B could propose something different.

Meanwhile, NOAA is working to assess the risk that lobster fishing poses to the right whale. That assessment, called a “biological opinion,” is expected soon, Kelliher said. It will include an analysis of the right whale’s presence in the Gulf of Maine. (See A view from Atlantic Avenue, pg. 5.)

At the kitchen table

More paperwork awaits fishermen who intend to file for federal relief. As part of the CARES Act enacted in May, NOAA allocated $20 million to the Maine fishing industry. But individuals will have to show a 35 percent revenue loss over the previous five-year average to receive any federal money. For many fishermen, that would be a difficult and time-consuming task, according to Kelliher.

On September 29, Kelliher announced in an email that DMR had convinced NOAA to accept the data the state collects from individual fishermen on how much they land. So DMR will soon contact individuals to tell them if state records show they’d lost enough revenue to qualify for the CARES Act money, Kelliher said.

DMR will also reach out soon to fishermen to help them with applying for the money, Kelliher said. But recreational fishing guides, wholesale dealers and aquaculture operations are on their own to demonstrate to NOAA that they’ve met the 35 percent criteria, he said.

Maine lobstermen can also expect a $50 million windfall from the U.S. Department of Agriculture’s Seafood Trade Relief Program. The program, announced September 9, compensates Maine lobstermen for losses suffered because of retaliatory tariffs. They’ll receive 50 cents for every pound of lobster landed in 2019, up to $250,000 per person. However, they’ll have to fill out a long application form first.

State Rep. Genevieve McDonald has created a guide to filling out the forms.