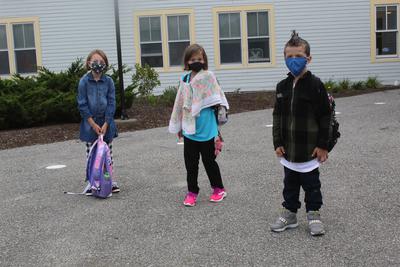 Mallory Heanssler and Clare Malcolm are in the same fourth grade class, and Rowan Malcolm is entering first. All are properly attired and distanced for in-class learning.

Whether contact sports will happen at school this fall remained up in the air as most Island students returned to class on September 8 for the first time since the COVID-19 pandemic came to Maine.

Added to the uncertainty over sports were the unfamiliar procedures the students encountered inside and outside the decluttered, sanitized school buildings. The bus schedule changed, some parents dropped off their kids in the wrong spot and the smallest children didn’t quite get what the dots on the pavement were for.

But the students, all wearing face masks, showed they could adapt to classroom learning in a time of pandemic.

The School Union 76 Board in August decided to ban fall contact sports such as soccer, but then on August 28 the Maine Principals Association (MPA) endorsed all sports, including football and wrestling. Maine’s top education and public health officials then rebuked the MPA, which schedules interscholastic sports competitions.

The MPA backed off temporarily, announcing a one-week delay of the fall sports schedule while it reconsidered. The Community School District Board on September 1 decided to stick with its earlier decision until the issue is resolved.

However, the CSD is under some pressure to go ahead with sports. “LET US PLAY” read two-foot-high letters spelled out in the chain link fence bordering the ball field. “WE WANT 2 PLAY!” read the others. High school principal Dennis Duquette said in an interview that a group of parents asked for permission to put up the message.

The Deer Isle-Stonington Elementary School faced the logistical challenge of keeping children apart from each other and confined to their classroom pods. That meant using as many entrances as possible and requiring parents to drop their children off one car at a time—no hugs outside the car.

The school also had to keep track of all those kids partially disguised by face masks with kittens, sharks and dinosaurs on them.

Principal Tara McKechnie explained that’s how the teachers inside the building knew their students had arrived—they could see it on their own computer.

About 18 percent of elementary school students are staying home, and of those who came to school, fewer than half took the bus, according to McKechnie.

After check-in, Coach Dana McGraw greeted the children dropped off by their parents and pointed them toward the school’s separate entrances. Yellow balloons marked the third- and fourth-grade entrances, red balloons marked second grade. He told them to follow the dots on the pavement, which indicated six-foot distancing. His instruction didn’t always register with the youngest children.

Kelly Slaven, special education case manager for kindergarten through second grade, guided a child to the red balloons. “It’s so great to be back with the kids,” she said.

Only eighth and ninth graders came to the Deer Isle-Stonington High School on September 8; the upper three classes would come the next day. SU 76 Superintendent Chris Elkington explained earlier that the high school students needed more time and attention than lower grades for orientation because they move around the building so much.

Eighth graders arrived first at the high school, where they were ushered onto the gym’s refinished floor and seated six feet apart. Duquette then gave them a dose of positive mental attitude. “We’re on track to become the best high school in the state,” he said. And then he told the eighth graders they could change the world. They would do it, he said, “with respect, with kindness and with trust.”

“It’s to let them feel part of the bigger team,” said Cynthia Pease, art teacher. “It’s a year like nothing before, but it’s an opportunity. We can change things.”

After the morning assemblies and classroom orientation, the eighth and ninth graders went outside and listened to a steel drum band, which called itself “Pandemic Steel.”

“We wanted to do something special for the kids,” Duquette said.

They were told they could dance to the music—so long as they stayed six feet apart.

GALLERY — Back to School 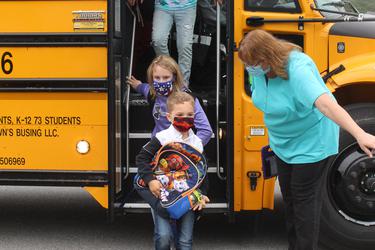 Plenty of room in this vehicle—fewer than half the elementary school students opted to return to school in a school bus. 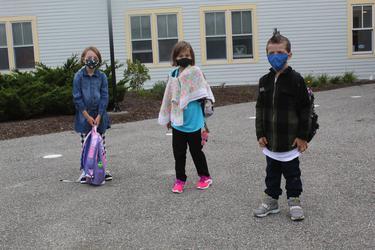 Mallory Heanssler and Clare Malcolm are in the same fourth grade class, and Rowan Malcolm is entering first. All are properly attired and distanced for in-class learning. 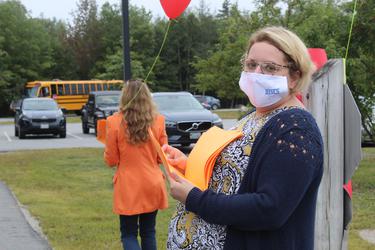 Deena Staples keeps things positive as parents wait in a line of cars to drop off their children. Staples, DISES administrative assistant, handed out orange cards with the names and numbers of the students, along with a greeting: “Smile! Smile! I’m so proud of you!” 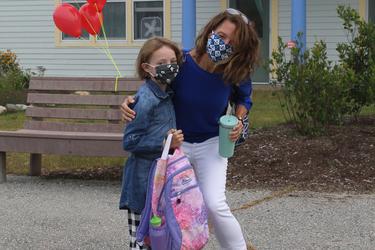 Deanne Heanssler hugs daughter Mallory before leaving her to her fate in fourth grade. At least Mom won’t be far away — Deanne’s an administrative assistant in the DISES office.