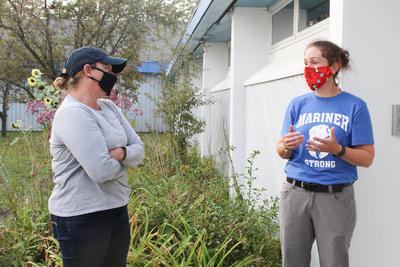 Parent Denise Rytky and Athletic Director Betsy Woodward talk about soccer outside of the high school just before the CSD Board voted to approve the sport this fall—with restrictions.

The Community School District Board changed its mind about allowing varsity soccer competition in the fall during a September 14 emergency meeting.

The board voted 4-1 to add soccer to the list of allowable fall sports during the COVID-19 pandemic. In August, the board decided only to allow golf and cross-country.

The day before the emergency meeting, Union 76 Superintendent Chris Elkington sent a memo recommending Deer Isle-Stonington High School allow students to participate in a limited fall competitive varsity soccer season, but only under certain guidelines. Elkington noted many other Maine superintendents are doing the same.

“We have to give them things to do to keep them out of trouble,” she said.

Bill Shepard, the lone vote opposing the decision, expressed concern about competitive sports causing COVID-19 to spread to an elderly and vulnerable population.

“We’re in a pandemic,” Shepard said. “For me it’s all about the public safety and making sure the vitality of our island survives this.”

The CSD’s back-and-forth resulted from the flip-flop by the Maine Principals Association (MPA), which schedules interscholastic sports. After the CSD Board decided to allow only golf and cross country, the MPA gave the go-ahead to all fall sports, including football and wrestling.

But then the state’s top education and health officials told the MPA to go back to the drawing board.

The CSD board met again and decided to await the MPA’s new position. When the MPA came out with stricter guidelines—no indoor volleyball or tackle football—the school board met in an emergency meeting—their third on the issue.

The school board’s decision follows a controversy over a message spelled out on the ball field in Deer Isle. A group of parents and students on September 7 put blue and red cups in the fence links that said, “LET US PLAY!” and “WE WANT TO PLAY!” They had asked Principal Dennis Duquette for permission. Though the town owns the field, the school uses it.

Elkington then called Town Manager Jim Fisher asking if he could take the cups down. Fisher said yes, and down they came the next day. Elkington sent a memo to parents and guardians saying the sign was dismantled because, in the school board’s opinion, “the message, along with the possibility of future like messages could ‘inhibit the functioning or normal operation of the school.’”

But on September 10 the Deer Isle Select Board said the sign should have stayed.

“Let ‘em do it,” said Selectman Joe Brown. “The worst thing we can do is throw water on their enthusiasm.” Selectmen Ronnie Eaton and Peter Perez agreed.

Denise Rytky and others had put the sign up. A month earlier, she had joined a statewide parents’ group called Let Them Play Fall Sports in Maine, which, she said, has 11,000 members. In Ellsworth, the group put up a similar sign. Rytky, the only parent who attended the CSD’s emergency meeting, called it “disheartening” for the students to see the Deer Isle sign taken down.

Among the guidelines adopted by the board:

The season ends if a single coach, official or player, home or visiting, is diagnosed with COVID-19;

The wearing of masks and social distancing among players, coaches, officials and spectators will be strictly followed and enforced except for players on the field. (Players should stay six feet apart “whenever possible,” e.g., during drills and warmup, according to the MPA.);

Only 100 people may gather at a sporting event, including teams, coaches and staff;

Only spectators from the home team are allowed at home games;

No snack shack; No inside practices.

Tara Perez, practice manager at Blue Hill Hospital, spoke at the CSD board’s emergency meeting and endorsed the guidelines. She said it’s important for the students to understand their role in going out for sports.