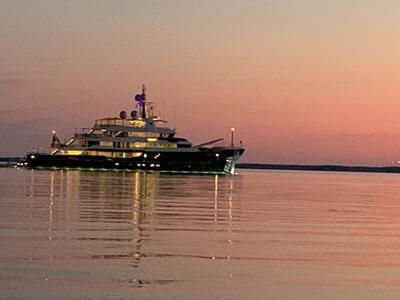 Cheryl Wixson spotted Scout anchored off Crockett Cove. The 209-foot luxury yacht’s interior was influenced by the Nautilus submarine from 20,000 Leagues Under the Sea..

George Larrabee has a network of people who tell him if a yacht is near his home on Little Deer Isle. Larrabee will rush to the scene to take a photograph and then, if the vessel is heading eastward on the Reach, he’ll race to the bridge and get a shot. Then he’ll go home and find out everything he can about the boats he calls “fancy billionaire yachts.”

“When I see a big yacht I have to get the name, I have to look it up,” he said in a phone interview.

Sometimes he just gets lucky. On August 9, Larrabee happened to spot the 180-foot Silver Shalis anchored in front of Pumpkin Light. Then, he said, “I smoked it down to the bridge.” He snapped the yacht just as it sailed under the span.

Larrabee isn’t alone. The many yachts that ply the waters around Deer Isle in summer have inspired a network of yachtspotters who photograph their finds, research them and share what they’ve learned. Smartphones, Facebook and Google—and plenty of oceangoing billionaires—make it all possible. Just by Googling the name of a vessel, yachtspotters can often find out which rock star, hedge-fund manager or Saudi prince is enjoying that basketball court or wine cellar on board.

“Well don’tcha know, as luck would have it, Penobscot Bay has been blessed with not just one, but two ultra fabulous mega yachts today!,” Aldrich wrote. “Lay your eyes on Felix. Out of the mist, rain, and fog she sliced across our bow to settle in next to Merchants Island, and Isle au Haut for the evening.”

The other yacht he saw and photographed that day was the 295-foot DreAMBoat. Aldrich wrote that both former British Prime Minister Tony Blair and wife, as well as the rock star Bono and family, cruised on her last summer through Australia.

Fellow yachtspotter Ellen Dinsmore saw DreAMBoat on Facebook but missed it from her living room window on Bay View Avenue. Aldrich, she said, was able to see that enormous yacht in the fog from the mailboat under way. “We didn’t have a prayer,” she said in an interview. But that didn’t stop her from finding out who owned DreAMBoat: Arthur Blank, co-founder of Home Depot and owner of the Atlanta Falcons.

On August 7, Dinsmore did get to see a hull familiar to her when the Archimedes returned to Penobscot Bay. After spotting Archimedes anchored in front of her house, she and her husband Ray took their 13-foot skiff out to get a close-up photo of the 222-foot yacht. Then Ellen posted on Facebook that the vessel was owned by James Harris Simon, a mathematician, philanthropist and hedge-fund billionaire. The yacht, she noted, is valued at $100 million and has room for 12 guests, a crew of 18, a pool and an outdoor cinema.

Yachts are getting bigger these days, Aldrich said in an interview at the mailboat dock. “Before, seeing a 220-foot yacht was a big one,” Aldrich said. “Now we’re looking at 250- to 300-foot yachts.”

“The windjammers were always the neatest thing to see,” said Dinsmore, echoing the sentiments of the other yachtspotters. Not this year, though. Restrictions due to the COVID-19 pandemic prevented windjammers from sailing to Deer Isle this summer, and the yachtspotters say they miss them.

Larrabee said he got a shot of the windjammer Victory Chimes (featured on the back of the Maine quarter) sailing under the bridge last year. “They have to go at low water because of the masts,” he said.

Not everyone shares the fascination with yachts. Steve Johnson, who now charters harbor tours, said his customers don’t have any interest in fancy billionaire yachts. “I get naturalists, not people who need a shoe shine before they get on the boat,” Johnson said in a phone interview. But as Stonington’s harbormaster for many years, Johnson saw all kinds of yachts, including boats owned by Walter Cronkite and Kenny Rogers, he said.

Cheryl Wixson found a new hobby just by looking out her window on August 14. Lying anchored off Crockett Cove was a 209-foot motor yacht called Scout. Wixson whipped out her iPhone, took a photo and sent it to a friend. She then discovered the yachtspotters’ grapevine when she mentioned Scout to Barrett Gray. Gray said his brother-in-law, Garrett Aldrich, had seen Scout and learned it had a Caterpillar engine.

Two days later, Wixson saw—and photographed—Scout again while visiting friends in Northeast Harbor. Three days after that, she saw from her home a sleek white yacht heading toward the Deer Isle Thorofare. It looked like the yacht that Johnny Carson once sailed to Bangor, she wrote in an email. She also admitted she was getting hooked on yachtspotting.

Larrabee said the late Lloyd Brimigion got him into watching fancy billionaire yachts. “He used to go up to the bridge every time a yacht came by,” he said. “We started to talk and I started doing it myself.”

It’s a relaxing hobby, he said. But he has one regret: “No one has offered to pick me up yet.” 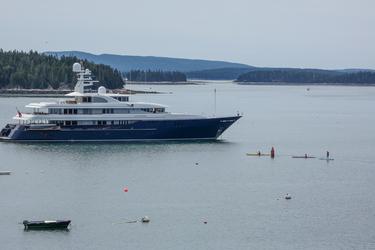 The 222-foot superyacht Archimedes has been in these waters before. Owner James Harris Simons, a former math professor, named her after the ancient Greek mathematician. 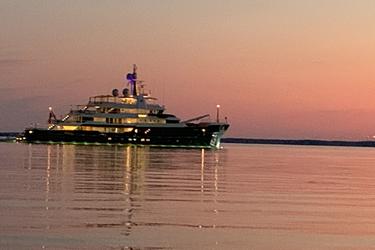 Cheryl Wixson spotted Scout anchored off Crockett Cove. The 209-foot luxury yacht’s interior was influenced by the Nautilus submarine from 20,000 Leagues Under the Sea..

Capt. Garrett Aldrich, was readying the Isle au Haut mailboat for a run to Dark Harbor when he spotted a luxury yacht in the distance (it’s right over his shoulder). 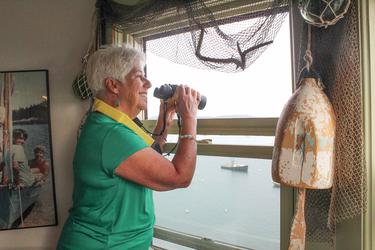 Ellen Dinsmore watching out for luxury yachts from the third floor of her home on Bay View Avenue.