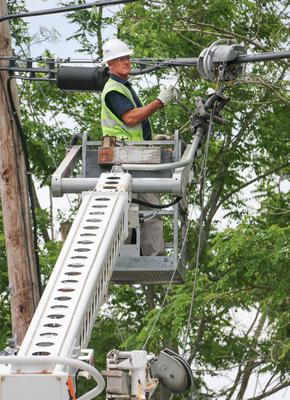 A Consolidated Communications worker strings fiber-optic cable along telephone poles in downtown Stonington. It’s the first phase of a project to bring high-speed internet to every home and business in the town.

Utility workers started stringing fiber-optic cable in downtown Stonington in early July, the first phase of a plan to bring high-speed internet to every home and business in town.

Consolidated Communications began with the business district, from 44 North Coffee down Main Street and up School Street to the former school building, according to Town Manager Kathleen Billings. Businesses along the path will soon be able to sign up for the high-speed service, she said.

Consolidated workers have lately been a visible presence in town, Billings said.

“They’ve been measuring and looking at the phones, they’ve got trucks and little cars and people busy walking, little scanner things,” she said.

She later explained the plan divides Stonington into four parts, with a different funding source for each. The four parts include downtown; the western part of town, including Fifield Point and Airport Road; the eastern part, including Oceanville; and, finally, Greenhead.

Billings announced at the July 12 select board meeting that Consolidated has just agreed to seek funds for building the final fiber-optic network along Greenhead. Other sources of funding for the project include venture capital, federal funding and local tax money.

A Consolidated spokesman has said a shortage of fiber-optic cable may delay the project, though Billings anticipates the company will start stringing fiber-optic to homes this fall or winter.

As the carrier of last resort, Consolidated already has copper wire to every residence in Stonington.