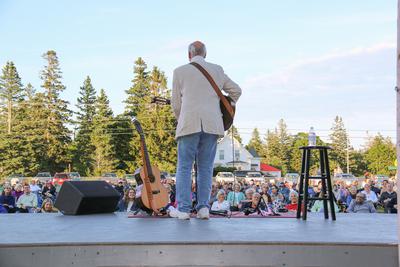 Noel Paul Stookey played before more than 250 people at the Stonington ball field on July 10 in an Opera House Arts concert.

The “Paul” of the iconic ’60s folk group Peter, Paul and Mary, Stookey sang some of the group’s hits, including “The Garden Song,” “Puff the Magic Dragon” and “The Wedding Song (There Is Love)”.

“It was a very magical night,” said Pam Getto, Opera House general manager. “You couldn’t have asked—weather-wise—for a better evening.”

Stookey, who lives in Blue Hill, began the concert by saying he was happy to see not a single mask in the audience.

He said he’d stayed at home in his living room during the past year of the pandemic. “This is new to me,” he told the audience from the stage. “There are a lot of people in my living room.”

Stookey performed solo, as he has mostly since the death of Mary Travers in 2009. He played some of his more recent music as well as the old favorites. 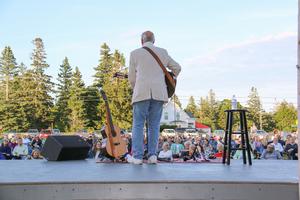 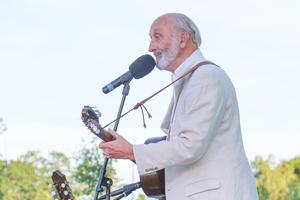