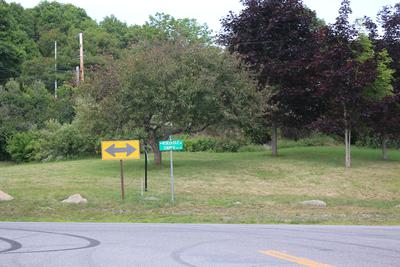 This parcel recently came on the market for $139,000. Some Deer Isle Village businesses think it might make a good parking lot or community septic field, if the town would buy it.

When a piece of land recently went on the market at the intersection of Bridge Street and Route 15, village businesses saw a chance to solve one of two problems: parking or sewage treatment.

The town, they thought, could buy the 0.7-acre parcel—asking price $139,000—and either put in a parking lot or a community septic field.

However, they quickly found out neither option would be easy.

“I think it’s a great opportunity, but I don’t know that we can take advantage of it,” said Town Manager Jim Fisher during the July 1 select board meeting.

Selectman Joe Brown was pretty sure they couldn’t. “I’m not sure it’s going to serve any useful purpose because it’s so small,” Brown said.

Two representatives of Deer Isle Village businesses, Mary Taylor and Candy Eaton, came to the July 1 select board meeting to discuss the property. Eaton, owner of The Periwinkle gift store, said the business community rather strongly favored using the land for septic and/or for parking.

“I think it would be great if we were able to put in an eating establishment or two,” Taylor said. The village currently has only private sewage treatment systems. Most buildings in the village are built on ledge with a limited footprint, making waste disposal a challenge.

The parcel, though, lies near a stream and has several abutters. Because it’s narrow, the site may not allow for adequate setbacks. There are also potential wetland issues, Taylor said.

Brown said the quality of the soil would determine how much waste could be treated, but he believes most of the soil is fill. He said he remembered piles of sawdust on the property from his childhood.

Fisher pointed out another problem—a hotel used to sit on the land before it burned down, but a large cement foundation remains.

Parking would bring its own set of problems. Paving the property could create drainage issues, Brown said. And access to the busy intersection could be dangerous.

“There have been a lot of accidents there in my lifetime,” said Selectman Ronnie Eaton.

Fisher said he discussed the possibility of a parking lot with Maine’s Department of Transportation. “It’s not a particularly good location, but with some earth moving and vegetation, it could be done,” he said.

Fisher also said someone had approached him with the idea of turning the site into a town green.

But timing also presents an obstacle. Were the selectmen to decide to buy the property, they’d have to win permission from a Town Meeting.

It would also be months before consultants could be brought in to do a study on potential uses for the land.

“The bottom line is there are a lot of questions to answer; it’s a hot real estate market and the likelihood is it’s going to sell,” Taylor said. “It would be a big ask to ask the town to buy it and figure it out later.”