Deer Isle
Originally published in Island Ad-Vantages, June 10, 2021
A close-to-normal high school graduation
27 students move their tassles from the right to the left 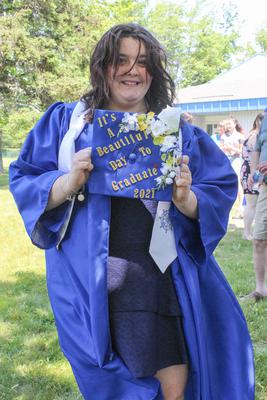 Peyton Rice was spot-on when she decorated her mortarboard. Graduation Day weather was perfect.

The 2021 Deer Isle-Stonington High School graduation featured a few tears, plenty of memories and lots of advice, as 27 seniors accepted their diplomas in the gym on Sunday, June 6.

It had been a year, noted Second Honors Essayist Mason Woodman, “of trudging through a senior year with no prom.”

But the ceremony came as close to a normal event as the pandemic would allow. Only 100 sat in the gym, according to the state guidelines. Families had to have tickets, sit in assigned seating and wear masks. But still, many more participated in the exercises than last year, when only small rotating pods of family members were allowed inside the gym to watch the graduates and a few speakers.

This year, Principal Dennis Duquette, who leaves after three years at DISHS, first recognized the teachers who, he said, had done so much during this year of COVID. He had an anecdote for each of the seniors, such as shooting hoops with Kaylee Morey or watching Rylee Eaton drive a pickup truck.

He offered some advice, as well.

“Be humble, be kind, be respectful,” he urged the graduates.

Class valedictorian Ariel Larrabee shed a tear when recounting how her late mother told her what “valedictorian” meant—and that she could be one. “The only reason I had this drive was my mom’s voice in the back of my head,” Larrabee said. She received a full-boat scholarship to the University of Maine, Orono, where she’ll study biomedical engineering.

A slide show by Alicia Allen featured pictures of the graduates from babyhood through their senior year. “It seems like high school has gone by in the blink of an eye,” said First Honors Essayist McHenna Martin.

In the three days from Friday to Sunday, students received 228 awards, for a total of $171,066. Those included a new Mike Wood scholarship in honor of the former teacher who passed away on April 2. The fund gave $500 each to four students who intend to go into the trades: Myles Brown, Coleman Brown, Michael Joyce and Dillan Steele.

Myles Brown also got a basketball—the game ball during which he shot his thousandth point.

Each member of the Class of 2021 received a “COVID Survivor Community Gift” of $100, the result of a Facebook fundraiser. 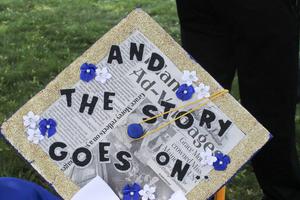 As the old saying goes, graduation isn’t an ending, it’s a beginning. 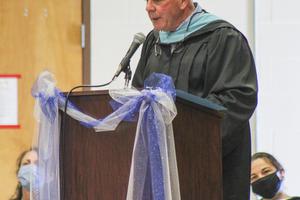 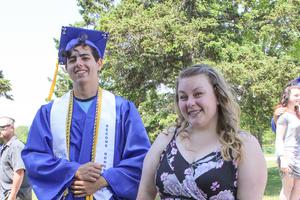 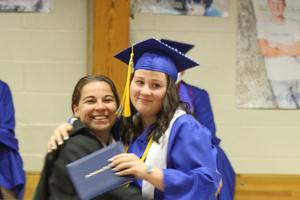 Jessica Talbot congratulates Taylor Hardy in front of 100 family members and friends in the school gym. 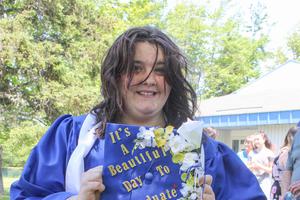 Peyton Rice was spot-on when she decorated her mortarboard. Graduation Day weather was perfect.