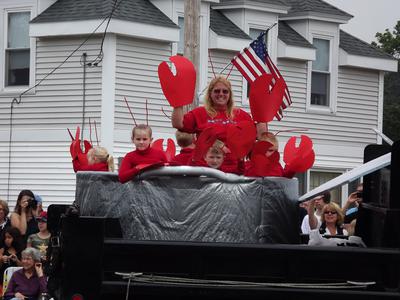 For many of her 34 years running Just For Kids, Terri-Lee Jones made a parade float. She had Minions, Puff the Magic Dragon, Burt Dow Deep-Water Man and a Hawaiian theme. In 2011, she dressed up her kids as lobster chicks and put them in a giant boiling pot.

Terri-Lee Jones admits she cries every time she reads the plaque she received when her Just For Kids daycare closed on May 28 after 34 years. One of her daycare mothers had it made for her, she said.

The plaque sits in her entryway on North Main Street, near the child-sized bench, the children’s photos, the plastic bins all neatly labeled, “Asa,” “Laylea” and “Lucas.”

The plaque has a poem on it, which begins: “Although you weren’t their mother, you cared for them each day. You cuddled, sang and read to them and watched them as they played.”

“It means the world to me,” said Jones, trying to hold back tears.

Brittany Jones worked with her mother for 11 years. She estimates about 700 children attended Just For Kids—and in some cases, multiple generations of the same family. “She’s gonna miss it,” Jones said in a phone interview.

Every Halloween, Dana Morey and her three children, Grace, Sean and Gabby, stop by Terri-Lee Jones’ house to reminisce about the good times they had at the daycare.

Grace, the former Miss Maine Teen USA, just graduated from Deer Isle-Stonington High School, along with seven other alumni of Just For Kids. “They adored her, they still do,” Dana Morey said. “It was like heaven.”

For children who had struggles with their families, or who didn’t have much, Terri-Lee made sure they had what they needed, Morey said.

“She’s touched the lives of so many kids on this island,” Morey said.

These days it isn’t hard to find accolades for Terri-Lee Jones.

“All three of my children went through her daycare and it was like dropping them off at their grandmother’s house,” said Jenna Billings in an email.

Jones started Just For Kids just after she had her son Kyle. She’d been working in a bank for eight years, and realized it wasn’t for her, she said. “I knew there was a need on the island, so I decided to give it a try,” she said. With space for 12 children, it was full from the beginning.

“I truly enjoyed it,” she said. “I always looked forward to getting up in the morning and being with the kids.”

Her daughter-in-law, Ashlyn Gray, said her children were “beyond ready” for kindergarten when they graduated. Jones even staged graduation ceremonies, complete with tiny caps and gowns for the children. For her last graduation, her family staged a surprise car parade.

“She loved to decorate, loved to dress up kids, loved the Fourth of July,” said Brittany Jones.

On one Fourth of July float, Terri-Lee dressed up the children as lobster chicks and put them into a giant lobster pot. She had a Hawaiian float, a Burt Dow Deep-Water Man float and a Puff the Magic Dragon float. Puff went to the Brooklin parade the next day, and Terri-Lee said she’ll never forget the sight of that dragon crossing the bridge.

On Fridays she’d take the children some place—tumbling class, gymnastics and swimming at the YMCA. Terri-Lee would also take the kids to a camp owned by her sister, Michelle Mahon, at Patten Pond in Ellsworth.

“We’d swim all day, have a campfire at night and roast marshmallows,” said Brittany Jones. “They [the children] would hunker down, go to sleep and then we’d do it all over again.”

As a working mother, Rya Trundy said she never could have taken her two children, Savanna and Wesley, to tumbling class or swimming on Fridays.

“Just the fact there was a daycare on the island was a big deal,” Trundy said. “It was a very positive experience. When you’re at work, your kids are safe.”

Trundy said Just For Kids was like a preschool. “They come out knowing their letters, they’re able to spell their first and last names,” she said.

If it weren’t for her health, Terri-Lee said she’d keep going. But she’s definitely scaling back. “I think the summer will be low key, relaxing and enjoying my grandkids,” she said.

Some activities will continue, though. She’ll still decorate the Community of Christ Church hall for Christmas. She’ll still let the neighborhood children play on her playground.

But, said Dana Morey, “she’s given so much of herself, it’s time for her to take care of herself and enjoy her family.”

As the poem on the plaque said:
“You knew someday the time would comemwhen you would have to part but know these children you’ve cared for ARE FOREVER IN YOUR HEART.” 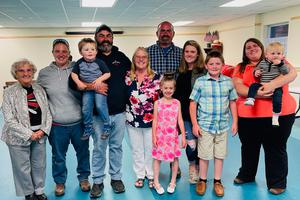 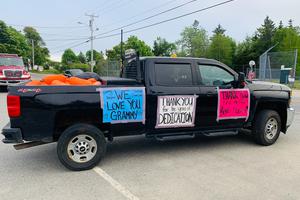 Terri-Lee’s son Kyle’s truck with signs for a surprise drive-by parade on her last day of Just For Kids daycare. 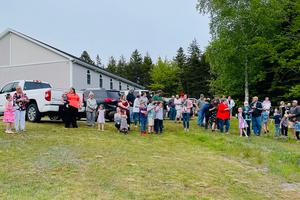 A crowd gathers to watch the parade after Just For Kids’ last graduation ceremony. 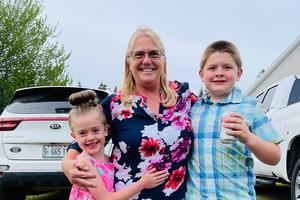 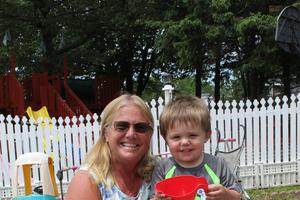 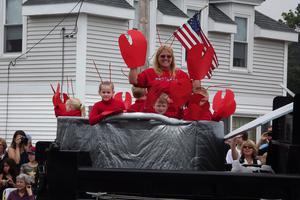 For many of her 34 years running Just For Kids, Terri-Lee Jones made a parade float. She had Minions, Puff the Magic Dragon, Burt Dow Deep-Water Man and a Hawaiian theme. In 2011, she dressed up her kids as lobster chicks and put them in a giant boiling pot.