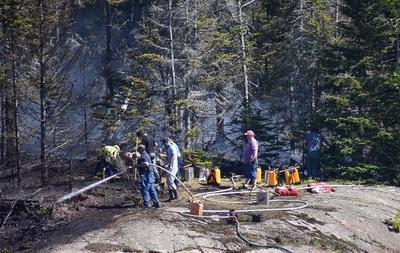 An escaped campfire in the woods by the Lily Pond was the apparent cause of a brush fire that took firefighters and the Forest Service seven hours to extinguish on May 28, according to Deer Isle Fire Chief Brent Morey. The next day more fires broke out in the same place, and firefighters put those out, too, Morey said in a phone interview.

A helicopter dumped 14 loads of water on the flames after Morey called the Maine Fire Service for assistance, he said.

Morey said a homeowner across the pond on Echo Lane saw smoke and called in the fire around midday. The fire was burning a considerable distance from the beach on an outcropping on the south side of the pond, Morey said.

He and a couple of other firefighters hiked toward the fire through the woods; the fire was not along a trail, he said.

Apparently, the fire had been burning quite a while, he said.

All the helicopter could do was to slow down the fire, Morey said. “There’s no way a helicopter can put it out,” he said.

When the helicopter finished, firefighters from Deer Isle, Stonington, Sedgwick, Penobscot and Blue Hill worked several more hours to put the fire out manually, Morey said. Some took a boat out and others hiked to the site. They used an Indian pump and pond water to douse the flames.

Conditions had been extremely dry and the day was windy. Morey said the fire consumed heavy duff, which is like tinder. “That duff is like peat, it burns deep and hot,” he said.

The next morning, someone walking along the trail by the cemetery on King Row saw smoke coming from the same area and called it in.

Stonington Fire Chief Ryan Hayward, Sedgwick Fire Chief David Carter and Deer Isle Deputy Warden Russell Bray took a boat out and found five fires had sprung up near the previous day’s fire. It took them an hour and a half using an Indian pump to put them out, Hayward said.

Morey said fire comes up where it wants to in the duff.

He said people should check the state website before they light a fire outdoors. Morey also pointed out a permit is required to burn anything outdoors. The Maine Forest Service Wildfire Danger Report can be found at maine.gov/dacf/mfs/wildfire_danger_report/index.html. 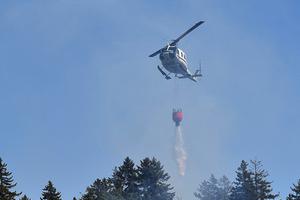 The Maine Forest Service helicopter dumps water on the brush fire across the Lily Pond from photographer Ned Hill’s home. The helicopter slowed the fire by dumping 14 loads of water on it, according to Deer Isle Fire Chief Brent Morey. 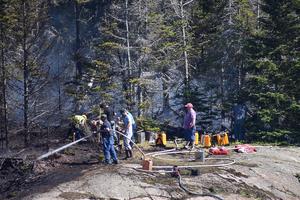