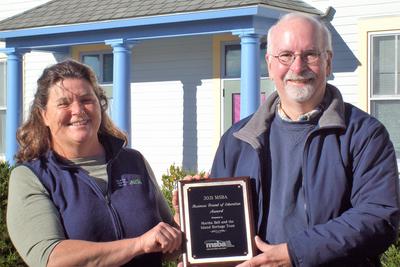 The Maine School Boards Association has awarded its Business Friend of Education Award to Martha Bell and Island Heritage Trust for their significant and ongoing commitment to support education, according to a press release.

MSBA President Lucy Richard presented the award on the second day of Maine School Management Association’s fall conference, attended virtually on October 28 and 29 by school board members and superintendents from across the state.

Island Heritage Trust funds an environmental education position that focuses on working with schools and has had a presence on Deer Isle since the early 2000s, when its volunteers would visit classrooms and organize field trips.

In 2013, Island Heritage Trust hired Bell, a talented and dedicated environmental educator, who now works with elementary school teachers to integrate environmental education into classrooms, according to the release. She is often in the schools five days a week.

In the high school, Bell provides content for the Eastern Maine Skippers program and other classes as requested. She also helps advise the Eco Club, where students are finding their voice around environmental issues and learning leadership skills. She has provided programming for after-school and summer school. During the pandemic, she ran live Zoom classes and made video field trips for teachers to use.

Bell, a resident of Blue Hill, and Island Heritage Trust were nominated for the award by the Deer Isle-Stonington CSD School Board.