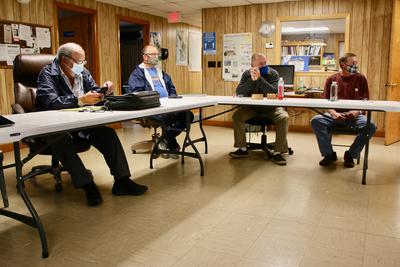 Islanders are rallying to solve the problems of workforce shortages, unaffordable housing, the potential demise of the lobster fishery and essential services in the wake of bad news over the past few weeks.

On August 30, the Island Nursing Home announced it is closing in October. On August 31, the federal government announced a whale-conservation regulation that will close 967 square miles of Maine’s lucrative lobster fishing grounds.

Then on September 23, the Island Employee Cooperative filed for chapter 11 bankruptcy restructuring protection.

The third joint select board

“You need some way you can care for your elderly, you need a grocery store,” she said. “How do we take the pulse of the ambulance? What do they need? We need to be that place where people can say, ‘We’ve got some issues’.”

Billings spoke at “that place”—the Deer Isle town offices on the evening of September 28, when the two towns’ select boards met for the third time in three-and-a-half years, according to Deer Isle Town Manager Jim Fisher. They had met in Deer Isle on May 17, 2018, and then in Stonington on November 12, 2019. Then the COVID-19 pandemic put a halt to the meetings.

Fisher said he was concerned that the new fishing regulations will hurt the island’s economy. “Fishermen won’t be buying as much, they won’t register cars,” he said. “The effect will be multiplied throughout the town.”

Stonington Selectman Evelyn Duncan said the island needs to diversify its economy. “Having a one-fishing crop doesn’t work if the lobsters have a problem,” she said. That’s one reason Stonington has been pushing high-speed internet, she said.

Billings said the shift to a more seasonal population has caused a worker shortage for many local businesses and essential service providers.

Billings said Stonington now has 500 seasonal houses and 500 year-round houses. “When I went to school, there were 50 to 60 kids in a class. Now you’re lucky to have 15 or 20. To try to analyze what you’re going to need for a workforce, it is a huge question,” she said. To keep businesses and essential services running, she said, will take “sheer numbers of people.”

Stonington Selectman John Steed suggested both towns pass ordinances that curb Airbnbs and summer rentals. “That would put some pressure to create more year-round housing stock,” he said. “Those are things both towns could do.”

Deer Isle Selectman Joe Brown said the pandemic has worsened the worker shortage, which hurts both employers and people who need their services. “If we lose one person we may have to close up for a day or a week,” he said.

He also said the island offers good, high-skilled jobs, and the towns should start working with the schools to do more training for that kind of work.

“We’re eventually going to be forced into having a full-time fire department,” Perez said.

“I like what you said, Peter,” said Stonington Selectman John Robbins. “We don’t need two of these or three of those.”

Duncan said it might be more efficient for the towns to buy things together.

“I’m going to hope this is the start of a joint relationship between the two towns because I think there is a tremendous amount we can do to help the island if we work together,” she said.