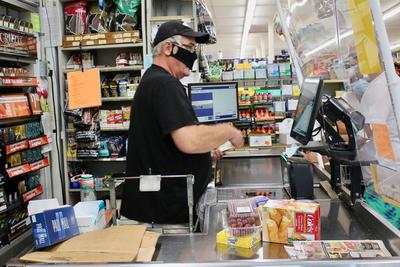 Craig Hutchinson keeps the lines moving at the Burnt Cove Market as the IEC works to restructure its finances.

Burnt Cove Market, The Galley and V & S Variety can all continue to conduct business as usual according to a federal judge’s ruling on Monday, September 27.

The court authorized the stores’ owner, Island Employee Cooperative, to continuing paying its employees and vendors.

“The hearing went very well,” said Adam Prescott, IEC’s attorney. He called it “an important step in allowing the Island Employee Cooperative to settle into the restructuring process and continue meeting its obligations to parties.”

Ben Pitts, IEC’s chief operating officer, said the judge was impressed with the amount of work IEC’s attorneys had done to get to that point.

IEC announced on Thursday, September 23, that it voluntarily filed for relief in U.S. Bankruptcy Court for the District of Maine. Doors to all three stores remained open during regular hours over the weekend.

IEC has been negotiating all summer with its three senior lenders to refinance its debt, which came due June 11, 2021, Pitts said. Those lenders have agreed to the IEC’s plan to restructure under the Small Business Restructuring Act. The SBRA, which took effect in 2020, gives small businesses a faster and cheaper way to restructure their operations under bankruptcy protection, Prescott said.

“The SBRA also allows a small business to preserve its existing equity structure through the restructuring and to invest in critical infrastructure improvements,” Prescott said.

The crux of the company’s financial problem, said Pitts, is that IEC agreed to pay owner Vern Seile about $5 million back in 2014. That, said Pitts, was more than the business is worth. The buildings’ roofs leak, Burnt Cove Market’s floor is buckling, and equipment such as a 60-year-old generator needs replacing. Pitts said the IEC has already put $100,000 into the Burnt Cove parking lot and needs to spend another $60,000 on it.

When Seile sold the three markets to the IEC, he sold $1.8 million owed him to National Cooperative Bank, Pitts said. NCB is one of three senior lenders, which means first in line to get paid. The other two senior lenders are Coastal Enterprises, Inc., which IEC owes $1 million, and Cooperative Fund of New England, which IEC owes $800,000, according to court documents.

At the time the senior lenders financed the $5 million purchase of the business, they believed IEC overpaid and asked Seile to hold a note for $1.5 million as a surety, Pitts said. “They financed what they were comfortable with and asked him to hold the rest,” said Pitts.

The court now has to decide how much the IEC must pay its unsecured lenders—including Seile. Seile, said Pitts, is not a lender but a lien holder.

Six months after the business was sold, the senior lenders told the IEC to stop payments to Seile, Pitts said.

Since then, the senior lenders have agreed to extend the debt payments, and IEC has not asked to reduce payments to them. “All of that was established before we filed for bankruptcy,” said Pitts.

Pitts said IEC can’t repay previous co-op members until payments resume to Seile. “One of the most important things to us was to pay back our members,” Pitts said, referring to employees who invested in the IEC but have since left.

The goal for the senior lenders and the IEC is for the IEC “to emerge from Chapter 11 as quickly as possible, with a minimum impact on day-to-day operations, an improved balance sheet, and a financially stable future,” according to court documents.

“All our bills are paid, we’ve never missed a bank payment and we have cash in the bank,” said Pitts.

The next step for the IEC is to come up with a 13-week plan. Pitts said IEC expects to emerge from bankruptcy protection in early 2022.

Kristy Wiberg, IEC’s president, said in a statement that the bankruptcy filing is a “necessary and important step to improving the company’s balance sheet.”

“For years, IEC has faced challenges balancing its large debt obligations with its operating expenses and the need to invest in its assets,” she said. “This is a financial restructuring, and we do not anticipate any changes to the stores or product availability for our customers.”

At press time, efforts to reach Vern Seile through email and phone were unsuccessful.