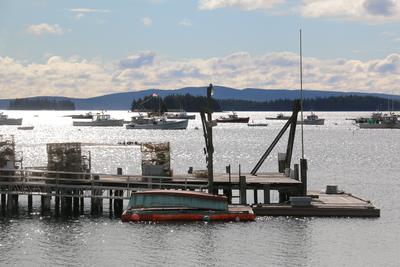 Our iconic fishing fleet can still catch lobster in the offshore zone after a federal judge ordered the federal government to keep it open.

The Maine Lobstering Union (MLU) convinced a judge on October 16 to block the scheduled three-month closure of nearly a thousand square miles of prime lobstering grounds in the Gulf of Maine.

The National Oceanic and Atmospheric Administration planned the closure to start October 18, as part of a new regulation to protect the estimated 368 Atlantic right whales left on the planet. The closure would take place every year, from October 1 to December 31, under the rule.

The MLU argued that there’s no hard data to show that closing the fishing grounds—the “offshore zone”—would save any whales. U.S. District Court Judge Lance Walker sided with the union.

“These findings related to right whale migratory patterns do not appear to justify the closure of LMA 1 [the offshore zone] because they do not demonstrate an ‘overlap of the fisheries and large whales in space and time,’” he wrote in his decision.

“This closure could be on I-95 and it would save as many whales,” she said.

Walker issued an injunction to keep the offshore zone open until the end of MLU’s lawsuit, unless NOAA appeals it, according to Alfred Frawley, plaintiff’s lawyer, in an email. The MLU challenges the offshore zone’s annual closure, which is part of the broader whale-protection rule.

“This victory by the Maine Lobstering Union is a significant step in protecting one of Maine’s most precious industries—lobstering,” Frawley said in a statement.

Allison Ferreira, NOAA spokesperson, said in an email, “NOAA Fisheries is currently evaluating the ruling and its potential impacts.”

The MLU’s lawsuit, though, is just one of several attacking the federal whale-protection rule. The rule also requires costly changes to lobster-fishing gear, and it takes effect in May.

The Maine Lobstermen’s Association in September filed a lawsuit seeking to strike down the rule in U.S. District Court in Washington, D.C. The MLA also filed an amicus curiae, or ‘friend of the court,’ brief in support of the MLU lawsuit.

On the other side, in September, opponents of rope fishing filed a court challenge to the rule, claiming it doesn’t go far enough to protect right whales. That case, CBD v. Ross, is also in U.S. District Court, and the MLA, MLU and Gov. Janet Mills are intervenors.

MLU’s Olsen sees the litigation as a 10-year battle to preserve Maine’s lobster industry. The recent filing just to get the injunction will probably end up costing between $100,000 and $150,000, she said. To raise money for ongoing litigation, the MLU formed a 501(c)(4), Sustainable Maine Fishing Foundation. The MLA also has a legal defense fund.

Local fishermen have said for years that they see no right whales in the Gulf of Maine. “It just falls on deaf ears,” Olsen said in a phone interview.

Olsen said she spent a week collecting the government’s own data about right whales for MLU’s lawyers. She went to Bangor for the hearing on Friday, October 15.

“I was so excited to see Judge Walker was getting it—he was getting the information, he was asking the right questions, the questions you hope he’d ask,” she said.

What Walker got was that the right whale doesn’t travel in the offshore zone, according to the National Marine Fisheries Service’s own Biological Opinion. The Biological Opinion forms the basis for the regulation.

Saturday, October 16, was Ginny Olsen’s birthday. “I had my phone in my hand and probably looked at it every eight minutes, hoping and hoping it [the decision] would be today,” she said. “It was 5 p.m. and I thought, ‘We’re not going to get it.’”

Olsen then left for her birthday party at a boat builder’s house. She wasn’t there for five minutes when she got the news about the U.S. District Court’s birthday gift—the injunction. “Everyone there was just as relieved as I was,” she said.

Walker’s ruling came at the beginning of the most lucrative part of the fishing season. He noted, in fact, that NOAA’s scheduled closure “is perfectly timed to ruin a fishing season, at least for the substantial lot of license holders who work these grounds.”

The Damon Family Lobster Company of Stonington is also a plaintiff in the suit, which was filed by the Portland, Maine, law firm of McCloskey, Mina, Cunniff & Frawley.