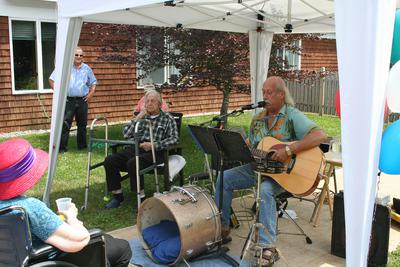 In 2010, Island Nursing Home residents enjoy a musical interlude at the annual open house. Performances like this one exemplify the entertainment and activities provided by the facility.

The Island Nursing Home announced plans this week to close on October 26, prompting tears and confusion among residents and their families. Local officials criticized INH administration and the board of directors for the suddenness of the news and the lack of transparency leading up to it.

The INH board blamed shortages of health care staff and housing for the decision. “‘[T]here are simply not enough qualified staff available in a rapidly declining healthcare workforce,” it said in a press release. “We have spent months exhausting every staffing resource at our disposal.’”

The nursing home won’t be able to meet its minimum staffing requirements beginning this fall, the release said.

INH is the third biggest employer on the island. News about the planned closure came the same week the federal government announced it will close 967 square miles of the Gulf of Maine to lobster fishing during the most lucrative time of the year.

“It is a huge economic blow to this island,” said Stonington Town Manager Kathleen Billings. “The number of jobs, the vendors, the families, the crisis the families are in.”

Whether the Island Nursing Home board will be able to reverse its decision still isn’t clear. “We’re not giving up,” said Ronda Dodge, board president, in a phone interview. “We’re going to do everything we can to try to come up with another solution.”

How the news broke

Matthew Trombley, INH senior executive director, informed the families and residents of the plans to close in a Zoom meeting on Sunday, August 29. Dodge called the Stonington and Deer Isle town managers with the news that same day. The next morning, Monday, two staff members told the rest of the 63-person staff. The press release was issued that afternoon.

“The tragedy of it is they didn’t let the rest of the community in on what was going on so we could help,” said Skip Greenlaw, who served as INH’s first board president.

State Rep. Genevieve McDonald said in an email that INH should have informed the community it was considering closing. “INH should have engaged with the community about the challenges they were facing and the dire nature of the staffing shortage. I hope we can find a remedy that keeps the nursing home open,” she said.

When asked why INH made the announcement so suddenly, Dodge said, “We have retained legal counsel and we were told we could not discuss it with anyone other than the executive committee.”

Stonington Selectman Donna Brewer, whose mother is an INH resident, participated in the Sunday Zoom call.

Bill MacDowell, a member of the Blue Hill Congregational Church, helped place a fellow parishioner at the Island Nursing Home. Her life had fallen apart, he said, and she didn’t have family. With help from church members, she got into INH. “She loved it,” MacDowell said in a phone interview. “It was perfect for her, she has so many friends there.” Now, he said, they’ll have to find another nursing home for her, and many have waiting lists. “It will be a huge blow to her life,” he said.

MacDowell reached out to U.S. Sen. Susan Collins to find out if the government was doing anything to help nursing homes. Collins forwarded him an August 26 letter she had sent to U.S. Health and Human Services Secretary Xavier Becerra. The letter noted that a quarter of the $187 billion in COVID-19 relief funds had not been sent to health care providers—including nursing homes—as intended.

MacDowell wondered why that money hadn’t gone out the door.

“The question for the state is, ‘Have you received some of this money? Have you acted? Will you act?’” he said.

The Island Ad-Vantages obtained a copy of INH’s “Notice in Advance of Facility Closure,” dated August 27 and signed by Matthew Trombley (see page 9). The notice included a list of 14 nursing facilities within 60 miles. It quoted the state regulation that said MaineCare recipients must accept the first available placement appropriate to their needs within a 60-mile radius.

Several people who receive mail on behalf of INH residents said they had not received the notice.

The notice also says residents may appeal the decision within five days of the notice. Stonington Selectman John Steed, an attorney, said that in order to file an appeal, a resident would just have to send a letter via overnight mail to a state administrator.

Dodge said the board was surprised on August 18 to learn that four contract workers will leave on September 22. There will be no replacement staff, she said. “It was a surprise to everyone on the board,” she said.

The staffing shortage didn’t result from a lack of trying, Dodge said.

“We were calling 42 different staffing agencies trying to get staffing,” she said.

Dodge said workers are leaving because their contract is up. On September 22, INH will lose 20 full-time employees who work 800 hours a week, she said.

Gov. Janet Mills’ order that all health care workers be vaccinated against COVID-19 by October 1 would have had only a minor impact on the Island Nursing Home, Dodge said.

On October 1 they’ll lose six more because of the vaccine mandate, she said.

If the nursing home hadn’t agreed to do an emergency closure, Dodge said the state would have found it violated regulations requiring the number of staff.

“The state would have forced 10 patients at a minimum to go to the emergency room,” Dodge said. The advantage to the emergency closure is that it puts INH patients in line for other nursing homes ahead of other people, she said.

“The last thing we want is our patients to go to an ER and be sitting there for days and months waiting for a placement,” Dodge said.

One question raised in the aftermath of INH’s announcement was whether the administration had considered reducing the number of beds to match staffing levels.

Could the nursing home, for example, provide a home for people who needed less intense medical care—residential care, assisted living, independent care? That would lessen the burden to find employees with advanced medical credentials.

But Dodge said just keeping the residential care part of the nursing home wouldn’t be enough to cover their costs.

“We have a small window of time to figure out what we can do with the beds,” Dodge said. “We can park them, we can sell them or we can lose them.”

Dodge, Trombley, the two town managers and others held a meeting on the morning of September 1 to discuss a way forward. The outcome was the formation of a task force to figure out if a way forward is possible.

“Everyone is still committed to trying to figure out how we can get staffing,” Dodge said after the meeting. “If we could stabilize staffing and get housing, we could stay open.” However, she said, that isn’t likely.

Nevertheless, Anne West at the Island Health and Wellness Foundation in Stonington is taking names for people to join a task force to save the Island Nursing Home. She can be reached at 367-5851.

“I’m not satisfied yet that this place has to close,” Kathleen Billings said.