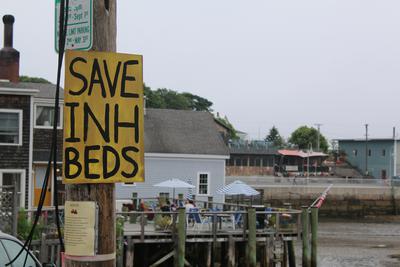 Signs like this one appeared all over the island on the morning of August 2.

On the morning of August 2, about 20 yellow-and-black signs appeared on utility poles from Little Deer Isle to Main Street in Stonington.

“Save INH Beds,” says one on Main Street in Stonington. “Fresh INH Leaders,” says another near Deer Isle Village. There’s also a sign next to the “INH” in question—the Island Nursing Home, closed to residents since last October.

Marcia Myers, a Deer Isle resident, said she belongs to the group of concerned citizens who put up the signs.

“Our effort reflects the community’s very strong desire to participate in saving the nursing home and keeping it as close to full capacity as possible,” Myers said in a phone interview. “Our goal is to try to unite public effort in stopping the sale of Island Nursing Home’s bed rights and to press them to release the financial disclosure that they have promised to make, but have not provided, and to get a new board we can trust.”

The group, which doesn’t have a name, also started circulating a petition with those demands. The Town of Stonington is also trying to stop the sale of INH’s skilled-nursing bed rights and has hired a lawyer to determine if it can do so.

Myers said the group will circulate the petition at places where people gather, such as farmers markets. It will ask for signatures from citizens of the towns served by the Island Nursing Home—the seven Blue Hill Peninsula towns and Deer Isle-Stonington.

Myers said the signs echo the opinions expressed by many people who attended the July 20 meeting of the Peninsula League of Towns and the Island Nursing Home board.

“No one’s accusing the board of wrongdoing,” she said. “We need a board that will be more transparent and will use the power of the community more effectively to save the nursing home.”