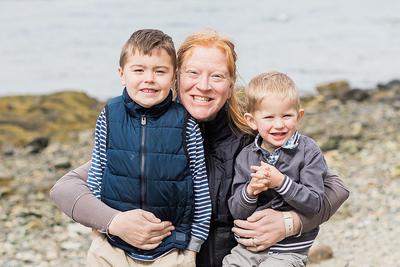 Holly Eaton, newly elected to the Maine House of Representatives for District 15, with her sons Samuel (left) and Harbor. The first regular session of the 131st Legislature convenes Wednesday, December 7, in Augusta. Swearing-in will take place at 10 a.m.

“First on my list is becoming comfortable with the process and learning from long-term legislatures who’ve said ‘Don’t jump in feet first. Sit back, watch and learn,’” said Holly Eaton about her newly elected position as Maine House representative for District 15.

Eaton, a Democrat, emerged victorious over Jason Joyce during the November 8 midterm elections and officially begins her two-year term in January. However, her plans to follow the advice of seasoned politicians doesn’t mean that Eaton is going to be waiting and watching for long: She has a list of priorities to tackle expressing her eagerness to get started advocating for the lobster industry and for women’s rights, improving affordable housing options, assisting the workforce and addressing issues related to the current fuel costs.

“I am their person”

Born and raised on Deer Isle, Eaton’s background includes several stints as a sternman on a lobster boat and a past professional role as the community liaison for the organization that is now Maine Center for Coastal Fisheries.

“I have a lot of connections to and experience working with lobstermen,” said Eaton. “I am an advocate for lobstermen. I will be as transparent as possible on any issues I work on with them because I want the industry to know and recognize that I am their person. I will not vote strictly on party lines. My goals are trust and transparency.”

She’s also realistic—understanding that her trust must be earned and that her opponent had a good deal of support from the lobstering and fishing community.

“Right now I am establishing credibility…A lot of the voting fishermen had their trust in Jason. There was a lot of support for Jason from those who are scared and concerned about the industry,” said Eaton, who stated that, while she was not surprised to have won, she would have been fully supportive had Joyce emerged the victor. “There was a lot of heart and soul on both of our campaigns.”

And, while her area of representation is economically, culturally and socially dominated by the lobster industry (the Maine Department of Marine Resources estimated the 2021 Stonington lobster landings worth $73.3 million), the district is not just fishermen. Eaton is also determined to advocate for women—to increase access and expand options for women’s health and reproductive rights.

“Keeping Gov. Mills at the helm means that I hope those rights will be strengthened,” said Eaton, who acknowledged that it is good that there are currently two places where women can obtain an abortion in the state right now—Mabel Wadsworth women’s health center in Bangor and Planned Parenthood in Portland—but that both are still “really far” from many people.

About the future, Eaton is optimistic: “You’ve got a whole culture of women who are ready to make a change.” She cited the pandemic as a catalyst—with so many people being at home, with women being caretakers. “I don’t think it’s surprising,” said Eaton about the influx of women in key political roles. In addition to Eaton and Mills, other area female elected residents include Nina Milliken from Blue Hill as House representative for District 16 and Nicole Grohoski from Ellsworth as Senate representative for District 7.

Figuring out housing and fuel

As for housing, Eaton is diplomatic when it comes to the controversy surrounding short-term rentals. “I understand both sides. A lot of people are making their income from short-term rentals, but then families cannot afford to live here,” said Eaton, who recognized that this is not an issue specific to her district (District 15 covers the towns of Brooklin, Deer Isle, Frenchboro, Isle au Haut, Southwest Harbor, Stonington, Swan’s Island, Tremont and Vinalhaven).

“Housing is a crisis across the state. The workforce needs housing,” said Eaton who added that the workforce issue is “integrally connected” to the housing issue. Eaton feels that a “several-tiered approach” would offer the most support. “We need to be able to look at the whole dynamic and make sure the infrastructure is in place.” She said that people need to be able to afford to live near where they work. She also expressed a need to attract younger people to the towns she is serving.

As for fuel, “a lot of Mainers will struggle with home heating costs this year. Fishermen are struggling with diesel costs,” said Eaton. “I worry about our fishermen with diesel being $7/gallon. It’s not financially viable.” She’s hoping there are ideas proposed to help early in her legislature.

A former Island school board member and the mother of two young children, Eaton also wants to recognize the invaluable role of teachers. “Our educators have done an amazing job in the face of the pandemic and I trust their judgment and the care of our children implicitly. I will do anything I can to support them. There’s been a lot of push back from some groups and I feel we need to be working harder to support them more financially, to recognize all they do. My hat goes off to them,” said Eaton.

Holly Eaton welcomes hearing from her constituents and can be reached at 610-9281 and hollyreaton@gmail.com (a legislative email address is forthcoming).