First-time candidates for state office talked about their priorities and answered questions from about 35 people at a breakfast held on June 23 in Town Hall.

Holly Eaton, a Deer Isle Democrat, and Jason Joyce, a Swan’s Island Republican, are running to succeed state Rep. Genevieve McDonald, who is stepping down to attend law school.

Eaton described herself as “probably very liberal.” She lives in the Parish House in Deer Isle with her partner and two boys, ages 3 and 6. She has served on the Community School District 13 board of directors and currently works as a massage therapist, she said.

Jason Joyce, an eighth-generation fisherman, said he’s pro-fisheries and not in lockstep with the Republican Party. He has been married for 33 years and has served on various boards including the Swan’s Island select board, the Lobster Zone Council and the Lobster Advisory Council.

The candidates were asked about climate change, workforce housing, the Island Nursing Home and the fishing industries.

Both candidates said climate change poses difficult challenges without a clear solution. Neither offered a plan to solve the affordable housing problem.

But in answer to a question about local control, Joyce and Eaton differed. Joyce said a new law that allows landowners to add housing units on residential property takes away local control. “It sets a bad precedent,” he said.

Eaton, though, called the law, “a good start.” “We really do need to have more housing,” she said. “There needs to be a leverage of options to build multi-units.”

The candidates were asked about their top three priorities. Eaton said hers are protecting our fishing heritage, making sure children have access to health care, and protecting LGBTQ rights. She also said education is a priority.

Joyce said his top priority is opposing wind farms. Then come local control and family involvement with the school system, he said.

When asked to name a good role model in state or local politics, Joyce answered “Margaret Chase Smith,” who represented Maine in Congress from 1940 to 1973. Eaton said “Stonewall,” the gay rights movement that started with six days of protests and violent clashes with police in New York City.

The breakfast was sponsored by the Stonington Economic Development Committee and the Deer Isle-Stonington Chamber of Commerce. 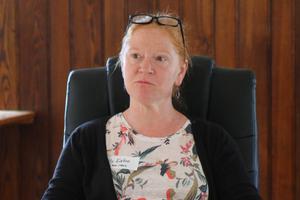 Holly Eaton, a Deer Isle Democrat, wants to succeed state Rep. Genevieve McDonald in November. Here she takes a question from the audience during the first candidates’ breakfast sponsored by the Stonington Economic Development Committee and the Deer Isle-Stonington Chamber of Commerce. 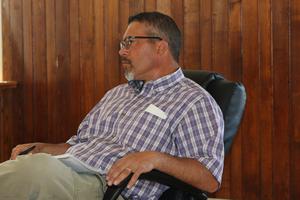 Jason Joyce, a Swans Island Republican, listens to a question during the June 23 candidates’ breakfast at the Stonington Town Hall. He’s running for state representative in the November election.