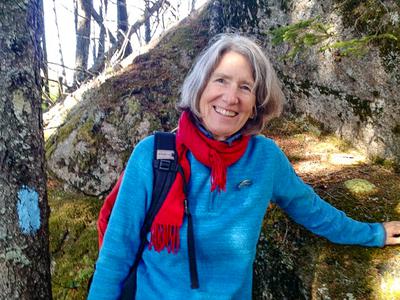 Deer Isle resident Lisa Schoonmaker was uncertain about her next professional venture when the idea for what would become a biannual magazine materialized during a hike with her sister and brother-in-law, Jennifer and David Anderson.

“My sister and I grew up with a lot of outdoor adventures and her husband hadn’t. David was almost sort of skeptical of it,” said Schoonmaker. “We were hiking in the White Mountains and I was the leader. We were on this trail and David was really questioning the logic of continuing. He said, ‘Our demise is going to be written up in Senior Hiker.’ This made us all laugh. As the trail got steeper, we joked about the idea of creating [such a publication]—that we’d get advertisers that were insurance providers, mortuaries, you know.”

Schoonmaker, upon returning home, thought about doing some consulting work related to her former career in communications. On her new laptop, she discovered a newsletter template, prompting her to type up a mock newsletter of that New Hampshire hiking adventure.

“I called it ‘Crazy on Nelson Crag’ which was the trail we’d been on. I wrote a couple of paragraphs and sent it to David and Jen as a joke,” recalled Schoonmaker. Her sister’s response: “Well, finish the story.”

And thus Senior Hiker was born.

Building a team, creating a dream

The magazine’s target audience has changed from what Schoonmaker initially conceptualized in 2015, but the goal has remained the same. “Originally it was for older hikers, though younger people subscribe now. The mission of the magazine was not to reach the summit, not to go fast, but really to bring that experience of the wilderness alive—through great stories, artwork, poetry, and every now and then some environmental science.”

As for the creative process, Schoonmaker does a lot of the heavy lifting, but she is quick to give credit to her small team. “Originally, I thought I’d design it and it’d be simple. But then we realized that we needed a real cracker jack designer.”

Schoonmaker’s mind went immediately to her friend and former colleague, Liane Judd. “She was reluctant at first. She was in retirement and I said, ‘Well yes, we all are!’ That really got us started…Liane ties each issue together in a really graphic way.”

While Judd continues as art director, with Schoonmaker as editor/publisher and David as photographer, they sadly lost Jennifer as editor. “My sister died two years ago, of cancer. There was a time when I thought we might not continue with it because she was so integral.”

They did continue, though they scaled back from three annual issues to two.

Each issue centers around an organically derived theme. “Sometimes a writer will say, ‘I want to write a story on Marmots’ and it’s someone I really want to have write for the magazine. Then I think, ‘Marmots? Huh. Maybe we should have a theme around animal and plants.’ One time I read a poem from a friend that was about the seasons. And I thought I really wanted to publish the poem…so that theme became ‘Seasons,’” said Schoonmaker.

Despite the magazine’s name, being a hiker isn’t a prerequisite for being a reader. “It’s not really tied down to hiking per se. The hiking is more a metaphor for the path we take.”

Schoonmaker is interested in journeys of the foot but also in journeys of the mind. “If we take a hike, say, we’re leaving the realm we know and we’re entering something different…there’s a change that happens. It changes us. It’s not just the way we think, but it’s the way we feel. And that’s what we’re trying to do with each issue of the magazine—trying to bring that shock of transition. We want to invite readers to pay attention to where we are.”

For Schoonmaker, Senior Hiker remains a passion project. “I enjoy every step. I don’t do the design, but I’m involved in all the decisions that are made. I do all the distribution from my living room! There’s a point in time where its all gathering and that’s the creative part for me—putting it all together,” she said.

Schoonmaker tries not to interfere with the creative process of her staff and contributors. “We’re just trying to pay attention and learn…Content comes from the minds and hearts of people who have experienced a lifetime.”

Of her writers, she shared that “some are professionals and need very little editing and some are new to writing, but they have a voice. The writing comes in to me in all different forms,” she said. “Sometimes I’ll get a really long email and think ‘What is this?’ And then I’ll read it and say, ‘Oh. This is special.’”

As for Schoonmaker herself, she lives what she creates. “I’ve hiked most of my life and I still can’t get enough of it. Everyday I go out walking around [Deer Isle]. Sometimes all it takes is a step between two trees and you’re in a different realm.”

Senior Hiker is available at Blue Hill Books, Periwinkle on Deer Isle and through seniorhikermagazine.com.