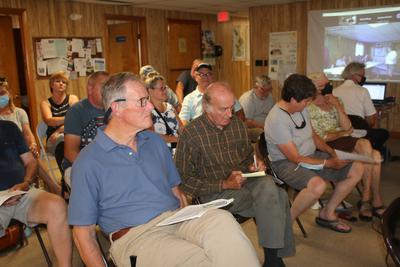 About 50 people came to the Deer Isle town offices to hear about the Island Nursing Home’s plans for the future of the facility.

The Island Nursing Home got a one-year extension of its operating license, INH board member Skip Greenlaw told an audience of about 130 people at a July 20 meeting of the Peninsula League of Towns.

The extension gives the board until October 22, 2023, to try to reopen as a residential care facility, its current goal, according to Greenlaw.

“The board is working on several possibilities of reopening the facility with residential care beds and assisted living beds,” Greenlaw told the audience.

In addition to that announcement, the meeting allowed the INH board, local selectmen and the public to air their concerns with each other.

“This is a challenging and emotional topic,” moderator Jane Osborne said at the outset. “We ask each speaker to be calm and civil.”

Greenlaw said that INH Board President Ronda Dodge had worked hard to reopen the facility and established strong relationships with state regulators. He also said the community’s help had been negligible and that it shouldn’t abuse the board. On the other side, several people said that the board should resign. Others objected to the plan to sell skilled nursing beds and demanded more information.

The Peninsula League, comprised of selectmen and town officials, asked the INH board to attend its quarterly meeting amid frustration with a perceived lack of communication by the board. About 50 people attended in person and another 80 or so, including INH Board Member Tim Hoechst, participated via Zoom. Representing INH’s board in person were board members Greenlaw, Karen Vickerson, Gidget Fagerberg and Leon Weed, vice president. John Doyle, the Preti, Flaherty, Beliveau & Pachios attorney for INH, also attended. Dodge did not attend the meeting because of a previously scheduled commitment, according to her spokesperson.

During the meeting, some people said INH should involve the community in planning to reopen because the community built the nursing home in the first place.

“We don’t feel trusted as a community, that we were brought in to be part of the solution,” said Rene Colson Hudson, Healthy Island Project executive director.

Former INH Board Member Kim Lengert said she wasn’t hearing anything about INH’s plan. “We don’t know anyone who’s working on it, the community has not been involved with it, the selectmen and the peninsula,” she said. “What is your plan? You need to share it with the community.”

Doyle responded that the board had met on July 14 with state officials.

“They offered, and we are in the process of getting projections for, a residential care option whether it be 25 or 30 beds,” Doyle said.

In a follow-up email to the Ad-Vantages, INH’s spokesman Dan Cashman shed further light. “It is still not financially practical to run solely as a residential care facility,” Cashman wrote. “However, the conversations with the State of Maine have been focused on trying to qualify for increased reimbursements or permission to run another service in the facility (such as senior living) that can help offset the losses.

“It’s also likely that any solution will require increased financial support from the community. Even though staffing for such an approach will still be incredibly difficult and the State is not optimistic about the timeline for the regulatory changes we have suggested, we are not yet ready to give up on the idea.”

In the days before the Peninsula League meeting, Greenlaw personally delivered copies of INH’s 2020 and 2021 federal tax returns, known as Form 990s. He dropped them off with town officials in Stonington and Deer Isle and at the Ad-Vantages office.

But INH has rebuffed requests for the financial audits on which those returns were based.

During the meeting, Selectman Peter Perez asked about INH’s financial status. “We’ve asked for your most recent audit and no one seems to be producing it,” he said.

Greenlaw replied the tax returns were developed from the financial audits. He also said INH is not subject to Maine’s Freedom of Access Act.

But Linda Nelson, former INH board member, pointed out that INH’s policy is to divulge its financial audits.

“On the bottom of the 990, there’s a box that says you will give the audit upon request,” Nelson said.

During the meeting, Dean Haskell also asked for the most recent financial results. “Until we know the financial position, there is absolutely no way, in my opinion, we can plan,” Haskell said.

On the day after the meeting, Stonington Select Board Chairman John Robbins sent a letter to Greenlaw. “You said you would comply with the 990 and make financials available at our request,” Robbins wrote. “There were multiple such requests made at the meeting as well as previous to it. We look forward to receiving these at the Board’s earliest convenience.”

Cashman, on July 26, wrote that the Form 990 was what was available for review. “All of the pertinent information is included in that document and this is standard practice for tax-exempt non-profit organizations,” he wrote.

INH’s decision to sell its skilled nursing beds raised concerns about what would happen to residential care patients who get sicker. During the meeting, Diane Hardy said her mother-in-law had been a resident of INH until it closed. “If you open it up for residential care, she’ll want to come back,” Hardy said. “If you open it up, when will that happen, and if she needs nursing care, where will she go?”

Greenlaw replied that skilled nursing care requires more staff than residential care. “If we don’t come to the state with a plan how we’re going to staff it, they won’t let us,” he said.

Stonington Selectman Evelyn Duncan pointed out the State of Maine isn’t issuing any more bed rights. “I would ask you guys to think long and hard before you sell all the beds,” she said. “Once they’re gone, they’re gone.”

Then she delivered an applause line: “You can’t sell all the beds; you just can’t.”

Doyle said INH has an interest on the part of one hospital with a construction project that wants to build a new nursing home.

“If we don’t make a deal before the closure happens, the opportunity evaporates,” Doyle said.

He said the state has been clear that INH should hold on to enough bed licenses to do what it thinks it can do.

Sedgwick Selectman Ben Astbury asked if the INH board had solicited interest in the bed rights. Doyle said it had, and that he reached out to the “usual suspects” of people who had construction projects.

In his follow-up letter to Greenlaw the next day, Robbins wrote, “there was an outpouring of community support for maintaining access to nursing beds on the Peninsula and island. We therefore ask that you do not sell the bed rights and that you work with the Towns to conduct a needs assessment, staffing plan, and gain public consensus.”

During the meeting, Greenlaw stressed that the one-year extension from the Centers for Medicare & Medicaid doesn’t mean that adequate staffing will magically appear.

“We just don’t have enough staff,” he said.

Weed replied to Eaton that turnover had been even higher with the previous administrator.

Since the meeting, INH has shared a table of different staffing scenarios. It shows, for example, that a residential facility with 25 residents would require 54 full- and part-time staff. The scenario estimates only 23 staff available today, and the facility would lose $1.3 million annually.

During the meeting, Stonington Selectman John Steed said the staffing problem sounded like something that money could solve. “There are people who give million-dollar donations regularly who live here,” he said. “If we paid $100,000, people, I bet, would move here. For $200,000, for sure.”

Hudson said she was sure people in the community were willing to work at the nursing home as nurses, certified nurses’ assistants or in the kitchen.

Greenlaw said the board was frustrated with the community’s broken promises.

“We have put the word out so many times, the response has been negligible,” he said. “There’s a gap between what people say and what they’re willing to do.”

Nelson said the INH board needs to rebuild trust with the community in order to find staff. “If there is no trust, you guys can’t go out and get people to work,” she said.” They are not going to work for you.”

Steed went further and suggested the board resign. “I feel like we need a new board,” Steed said. “Anyone else in a situation where they had messed up so badly and lost so much trust from the community, they should resign.” His remark elicited widespread applause from those gathered.

Nobody is stepping down from the INH board as a result of the meeting, Cashman said.

During the meeting, Robbins suggested that the INH board come meet with the Stonington select board for updates. Greenlaw thanked him for the suggestion. “But it’s important that if we come, we don’t get abused,” he said.

No follow-up meeting had been scheduled at press time.