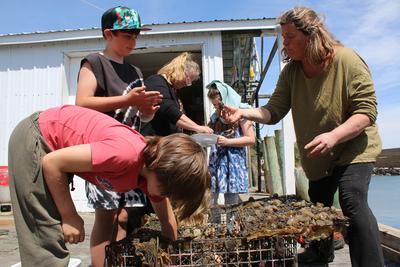 From left, Caleb Adams, Evan Snow, Jessica Gillen, Aliyah Torrey and Martha Bell examine the many, many organisms crawling around the ghost trap.

For three “Harbor Days,” starting May 23, elementary school students talked to divers underwater, looked for microplastics in mud, made charts under sunny skies and fondled starfish and sea urchins.

They were engaged in a new kind of learning the school now embraces—outdoors. Every Deer Isle-Stonington Elementary School student who wasn’t absent went to the wharf at the Stonington Lobster Co-op I to learn marine science.

The idea behind it is that students should learn skills that will help them in their careers, explained Marti Brill, Mariners’ Soar director, in an email. Many Island students, even in elementary school, own boats and view themselves as fishermen. Or they plan careers in related industries.

Harbor Days also got a boost from COVID-19. By the second year of the pandemic, Brill said, it became clear that teachers wanted to teach outdoors—and students wanted to learn that way, too.

So on the sunny, warm afternoon of May 24, Harbor Days began with Capt. Buzz Scott telling about 15 restive third graders how to behave on the co-op wharf. Scott runs OceansWide, which collaborates with schools on maritime science education and retrieves lost lobster traps from the ocean floor.

After Scott spoke, two divers, Andrew Jonash and Andrea Giddings, appeared before the students in what Jonash called their “very awesome Ninja suits.” The awed third-graders suddenly got very quiet.

“Are there kid sizes?” asked CJ. Other questions: “Is it hot?” “Is the oxygen tank expensive?” “Can you float into outer space with it?”

Before the students arrived, Jonash and Giddings had brought to the surface a lobster trap abandoned in Stonington Harbor. Scott said OceansWide divers had retrieved 2,000 such ghost traps from Boothbay Harbor since September. “Out of 30,000,” he said.

On the co-op wharf, a group of students gathered around the dripping ghost trap and watched Martha Bell, Island Heritage Trust’s environmental educator. She opened it and showed them the tag with the date on it. The trap had rested on the ocean floor for 20 years, Bell said.

She brought out sea urchins, starfish, a blood star, mussels and spider crabs. She showed them spirobus worms on a hunk of kelp and encouraged them to examine the organisms. Trevor Hendrixson looked at a sea cucumber through a magnifying glass. “I see its butthole,” he said.

One outcome of the hands-on learning experience with sea squirts was a lot of damp school clothes.

Each of the eight Harbor Days sessions was divided into three or four activities through which the students rotated.

They especially enjoyed the divers, Brill said. Under the careful watch of adults, students went down to the float wearing personal flotation devices. They sat and watched Jonash and Giddings fall backwards into the water. Then they talked to them by radio and watched live footage of what they were seeing. The divers even brought up one of their finds—a mud-caked fishing pole.

On another part of the wharf, Ross Momaney, arts integration specialist, held up tubes full of mud from the ocean floor. “We’re going to see if we see any plastics in this mud,” he said. They not only found plastic, but other things that aren’t healthy for fish to eat.

Across the way, Brill showed the third-graders how to make islands out of Play-Doh and then draw up nautical charts based on their shape and height.

According to Brill’s working document for CHOP, the program could last for many years. “Through Arts Integration and After School programs, we will involve all the students in the school in learning about and taking care of our local ocean environments,” the document said.

Brill also gave a shout out to IHT for recruiting volunteers and to The Activity Shop for donating the rental of 56 personal flotation devices. 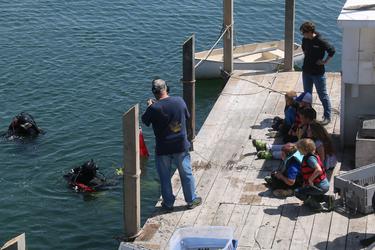 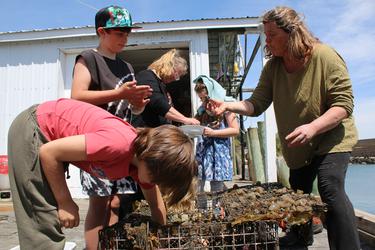 From left, Caleb Adams, Evan Snow, Jessica Gillen, Aliyah Torrey and Martha Bell examine the many, many organisms crawling around the ghost trap. 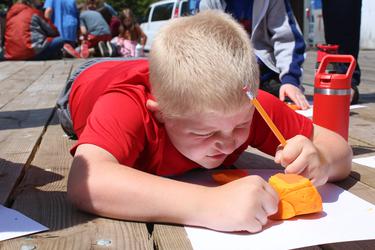 Nick Brown creates a chart of the islands he just made out of Play-Doh. 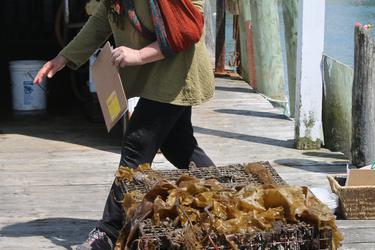 Martha Bell checks out the ghost trap before opening it in front of the third graders. The trap had rested on the bottom of Stonington Harbor for 20 years before divers hauled it to the surface.